“Can God spread a table in the wilderness?” 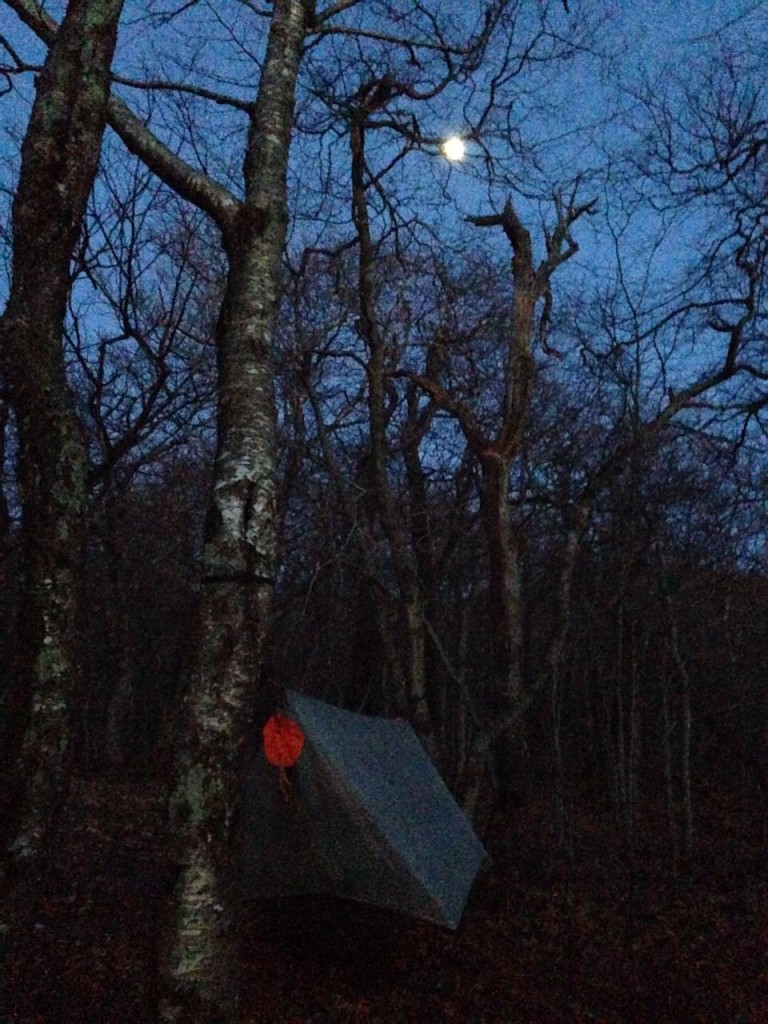 Psalm 78 is in the middle of a narrative of God’s goodness vs. man’s wickedness, so yes, it is a little out of context. Matt and I were fighting a different battle; God’s goodness in providing us a Table in the wilderness (Table Mt. in the Catskills that is) vs our sort of being in shape and climbing a mountain in the winter (well, last day of winter/first day of spring).

This trip started out as a trip to the Old Loggers Path in Pennsylvania that eventually morphed into “Hey, let’s go to the Catskills instead”. I took out the maps and poured over the possibilities, and every time I was drawn back to the area around Slide Mountain. The decision was made to hike to Table Mountain from the Slide Mountain trailhead, a hike of about 5.8 miles each way. After a 4 hour drive we pulled into the trailhead parking lot only to discovery just how popular Slide was as a day hiking destination – not a space remained. What’s a road weary hiker to do? I tried to make a spot work, but when you drive a F250 extended cab behometh there’s no squeezing into anything. Instead we decided to go to the trail head in Denning since it’s in the middle of nowhere and would shorten our hike to about 3.6 miles. Turns out this was a good choice.

As the pavement turned into a winding gravel road I thought, “There’s no way anyone is out here”. I underestimated how popular this area is. There were plenty of spaces in the lot, but there had to be at least a dozen cars there. We only saw about 4 other groups on the trail all day, so I have to assume this is another semi popular access route to Slide Mountain.

It felt good to saddle up, and the trail starts out as a pleasant walk on an old woods road. My guess is this was an old carriage road from way back, and the first 1.2 miles to the Table-Peekamoose Moutain Trail is nice, easy walking. 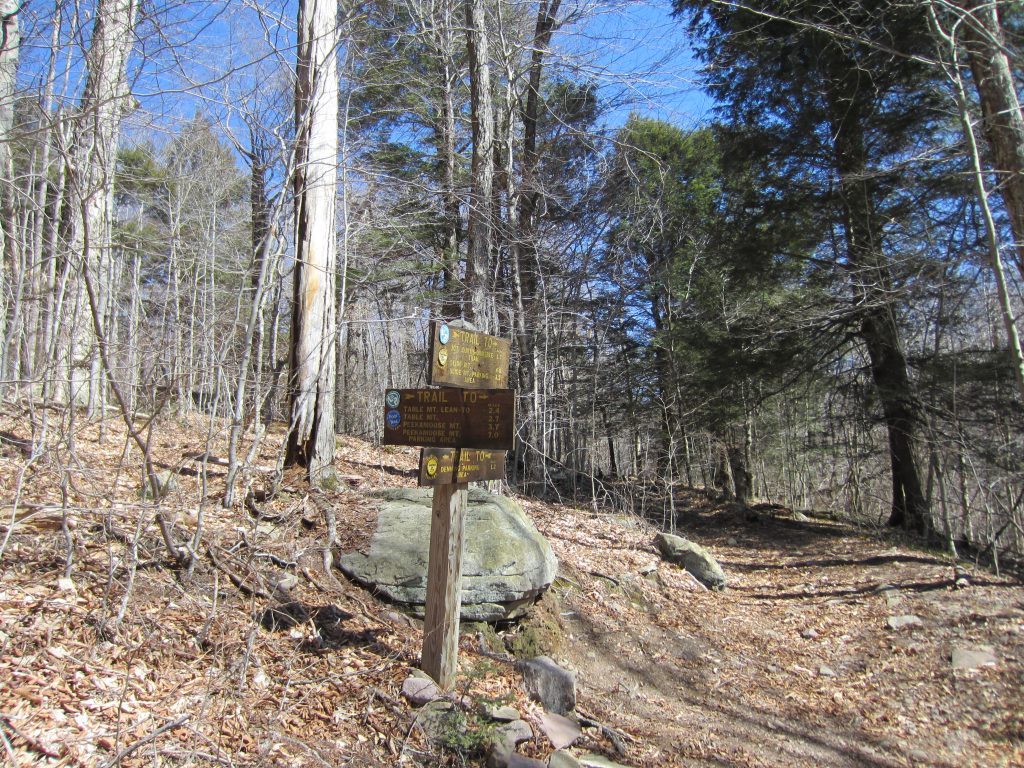 Turn off to Table Mt.

Interesting thing to me is that the junction of the Peekamoose Mt – Table Trail and the Curtis – Ormsby Trail is the terminus of the Finger Lakes Trail (or one of the spurs). I don’t understand why they just didn’t end either at the Denning Trailhead,or after crossing Table and Peekamoose, instead of here in the woods. How many licks to the center of a tootsie pop? The world may never know. 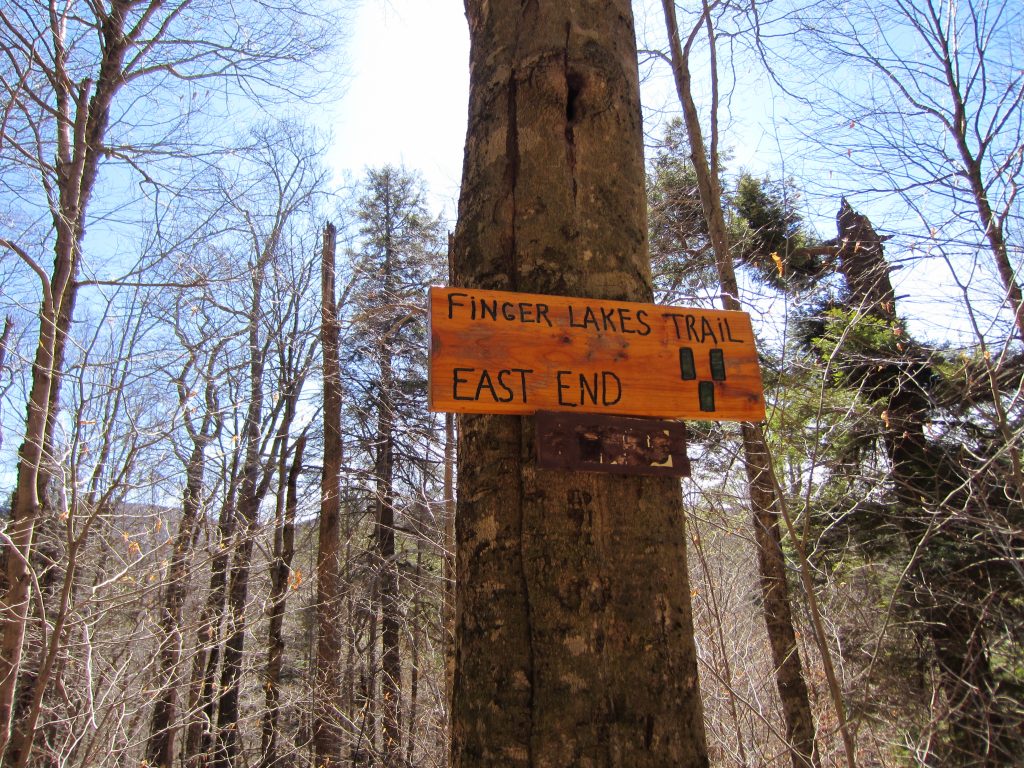 After turning onto the TPT (Table – Peekamoose Mt Trail) we started downhill on a moderate grade until we came to the two crossing of the East Branch of the Neversink River. The bridges that cross the Neversink are very well made, and you can tell that there are certain times of year (spring melt comes to mind) that you are not hiking here. 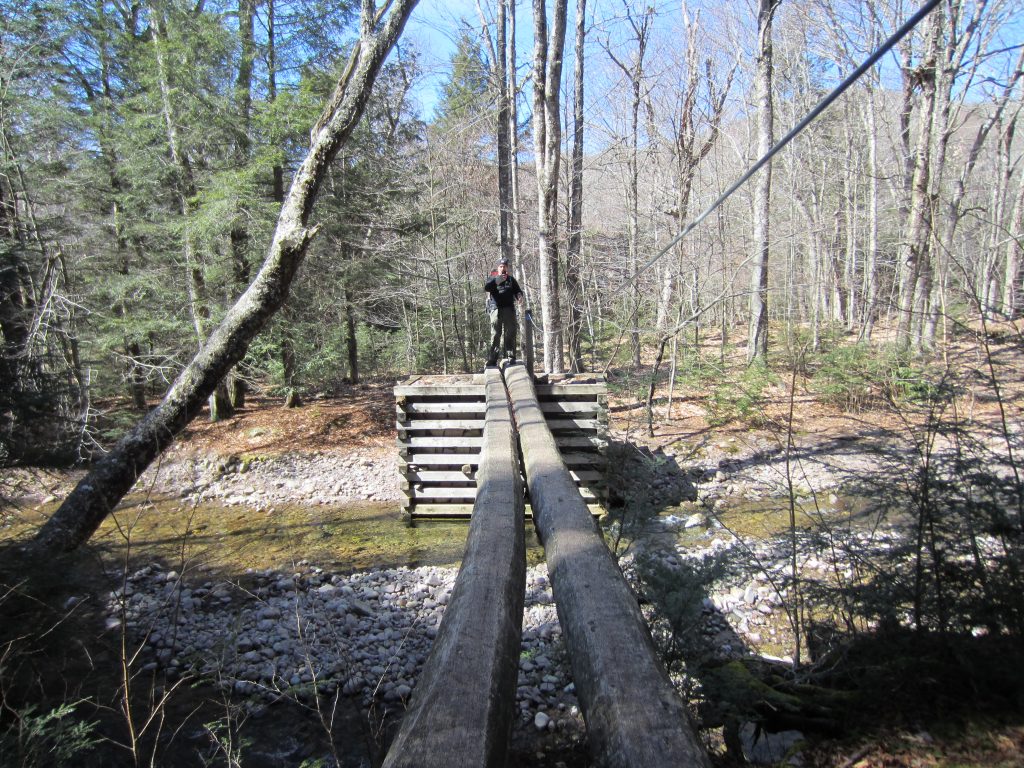 By the way, that rope on the second bridge is totally worthless.If you lose your balance your taking a fall.

Around this time we stopped to talk with a man and his son and we asked them if they were coming back from Table. His reply was, “No, we only made it partway up the steep section before turning back.” He told us he got his butt kicked by the mountain.

Upward and onward the trail started to climb, and shortly we realized we were on the section the guy was telling us about. He gave up too easy, as I think this was the toughest part of the whole hike. 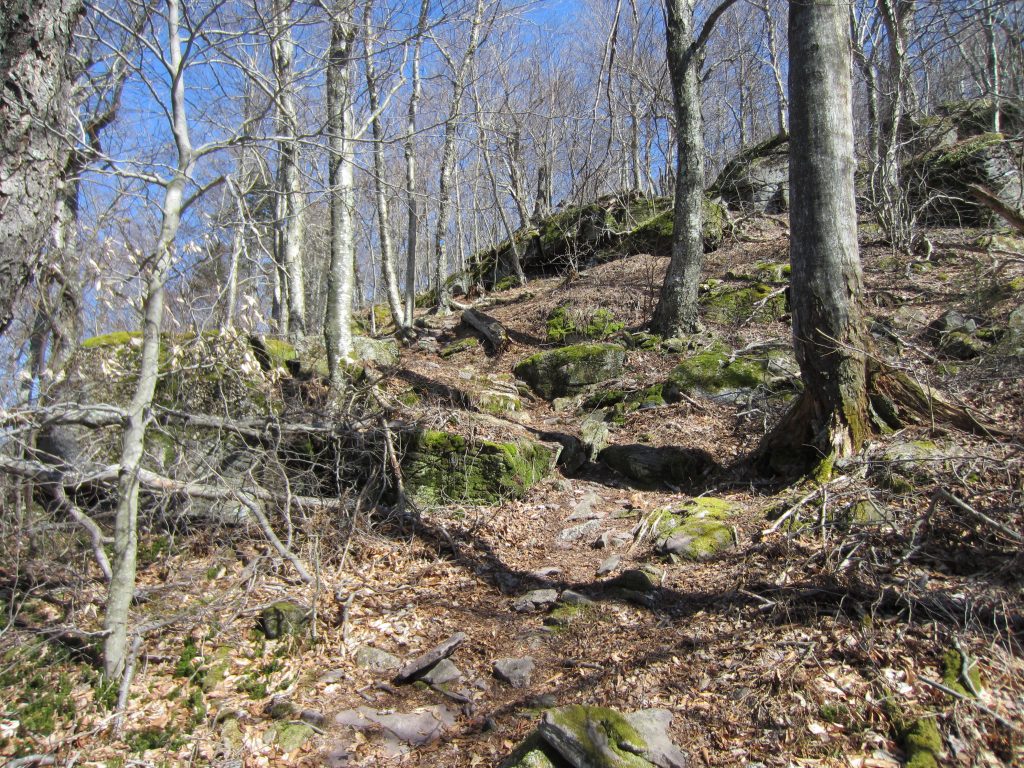 I thought we were climbing Table, but it soon became apparent we were just crossing a shoulder, and once over the top we met a group who confirmed my suspicion. They gave us some good info and encouragement,and once again off we went. We came to a viewpoint over Table and Peekamoose that allowed me to get my bearings, and we realized we were almost there.

Soon enough we passed the spring and came to the Table Mt lean to,which sits about 7/10 of a mile and about 500 (?) feet below the summit of Table Mt. 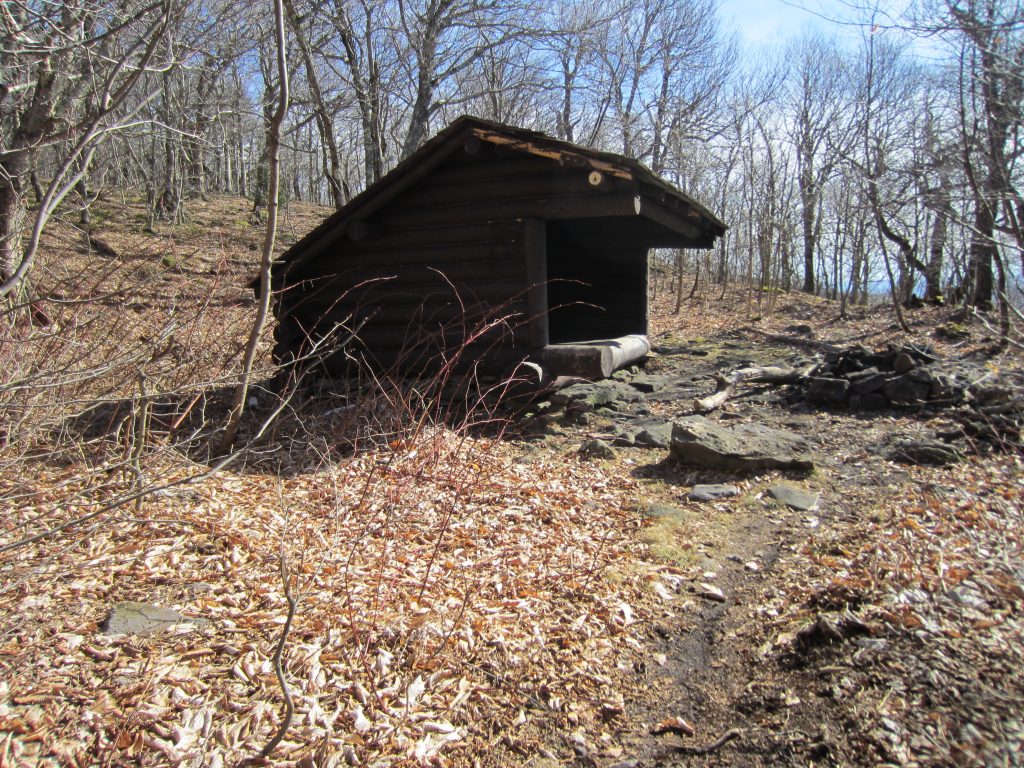 If you’re a hanger the trees are slim pickings, and Matt and I spent probably at least a 1/2 hour trying to find a halfway decent set of trees to hang on. 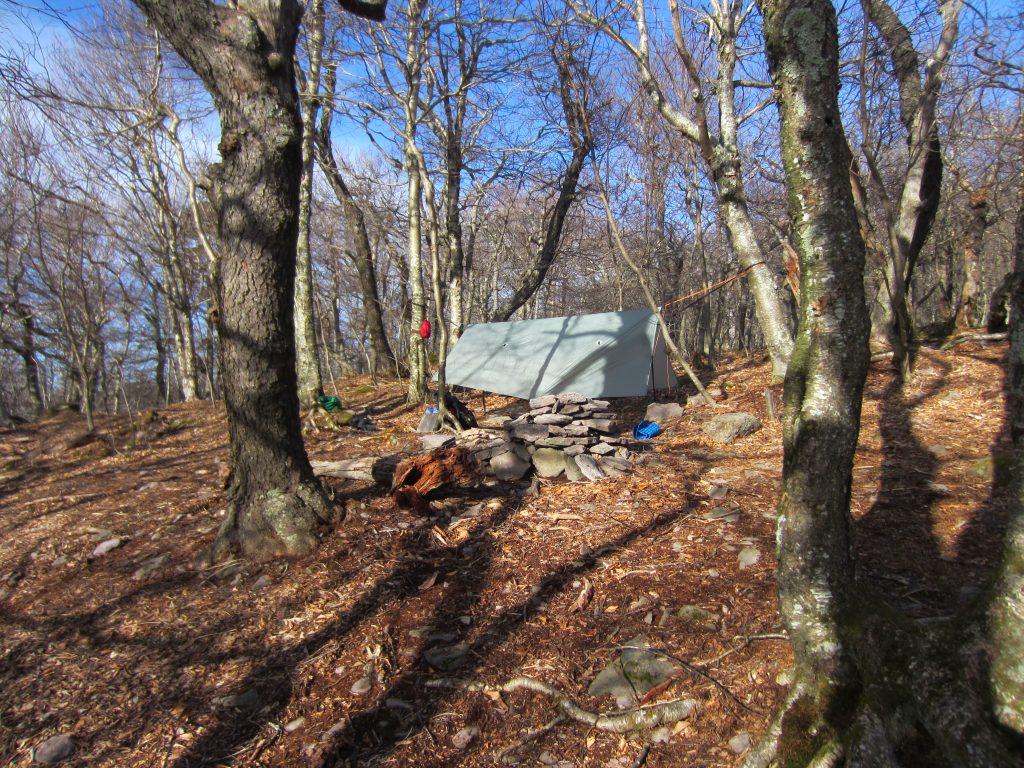 After getting set up Matt decided to hike to Table’s summit, while I took a nap. I was using a 20 degree 950 fill power goose down bag I had thrown together for this trip, and even though it was about 30° I was not as warm as I would have liked. After a bit of tossing and turning I decided to get up and look at my underquilt. As I turned to swing out of my hammock my butt bumped something underneath – the ground! I had hung my pack and trail runners from my webbing and it allowed enough slack for my suspension to slide down the tree! The hammock had sagged down, creating air gaps underneath,and no amount of top insulation was going to fix that.

That’s a no no

After resetting everything and climbing back aboard, aaaaah, instant heat!  Now that I was sure of a good nights sleep, dinner was the plan. I walked down to the lean-to so I would have a flat platform to cook on, and was met by three fellows from Jersey that were spending the night. The one fellow, Dan, was in the market for a hammock and quilts, and had a ton of questions. It was fun to answer their questions while I was cooking (Packit Gourmet Texas State Fair Chili, one of my favorites), and after we were done I plodded back to camp to see how Matt was making out. He had returned and offered that there was a limited view, and some snow on the summit of Table. 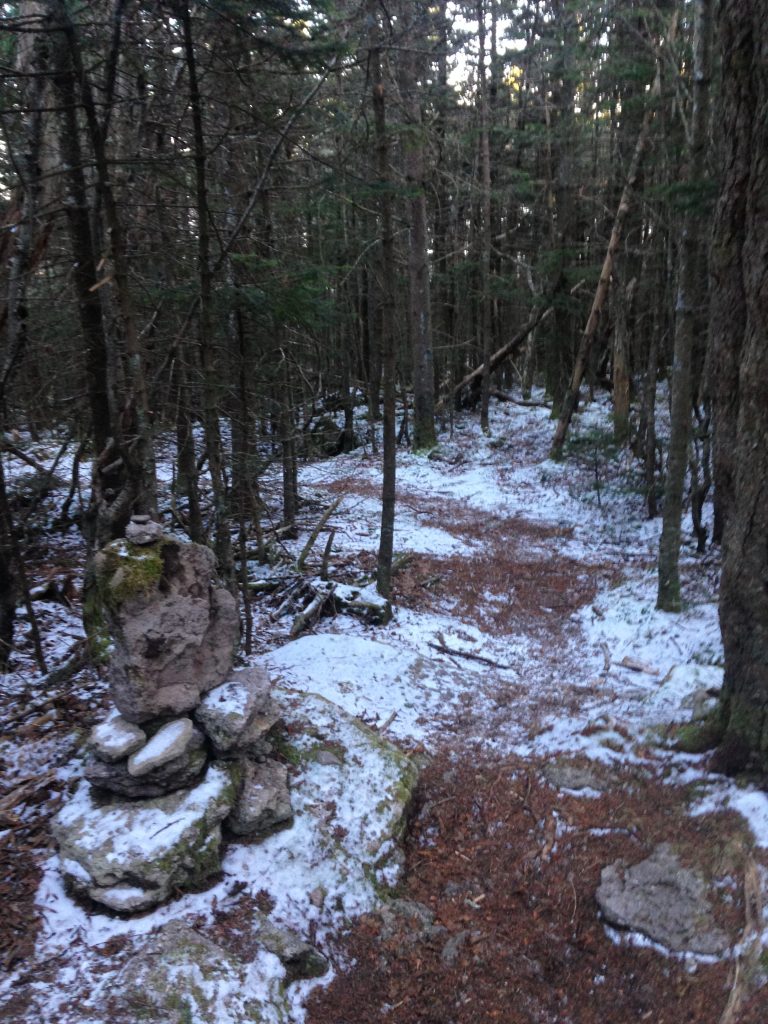 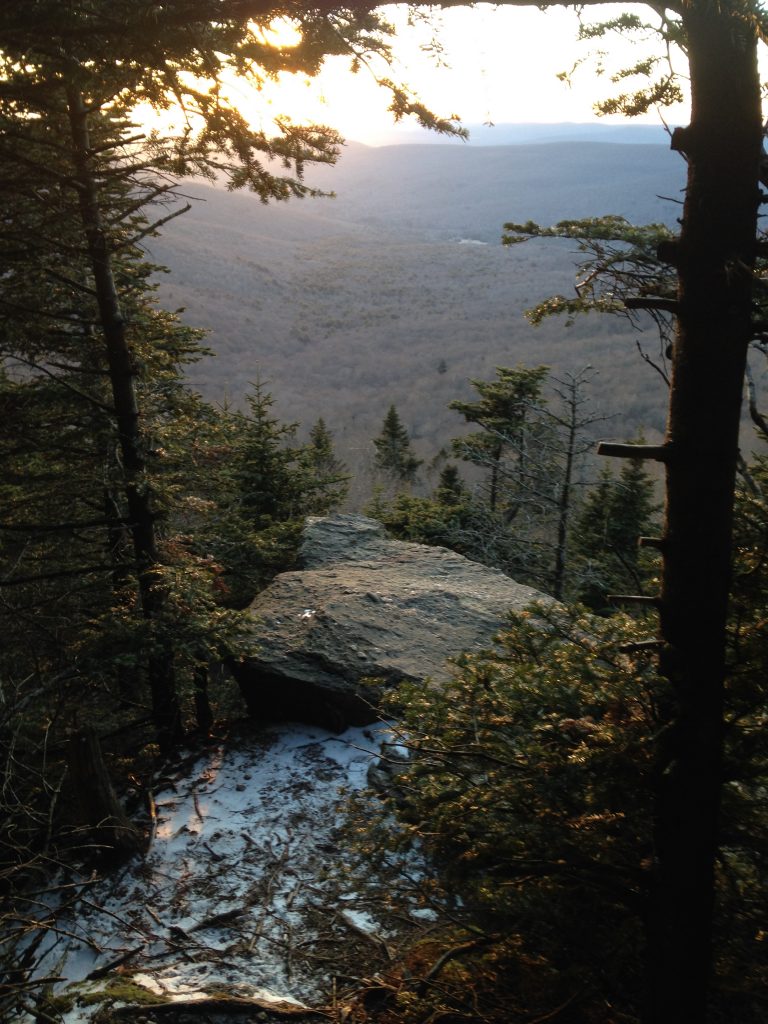 In addition to the forest of rotten trees where we camped, all of the down wood was wet and rotted as well. That’s no issue for Matt, as he seems to be able to set water on fire. His trail name should be the Torch, because you will always have a campfire, no matter the conditions,when Matt is around. 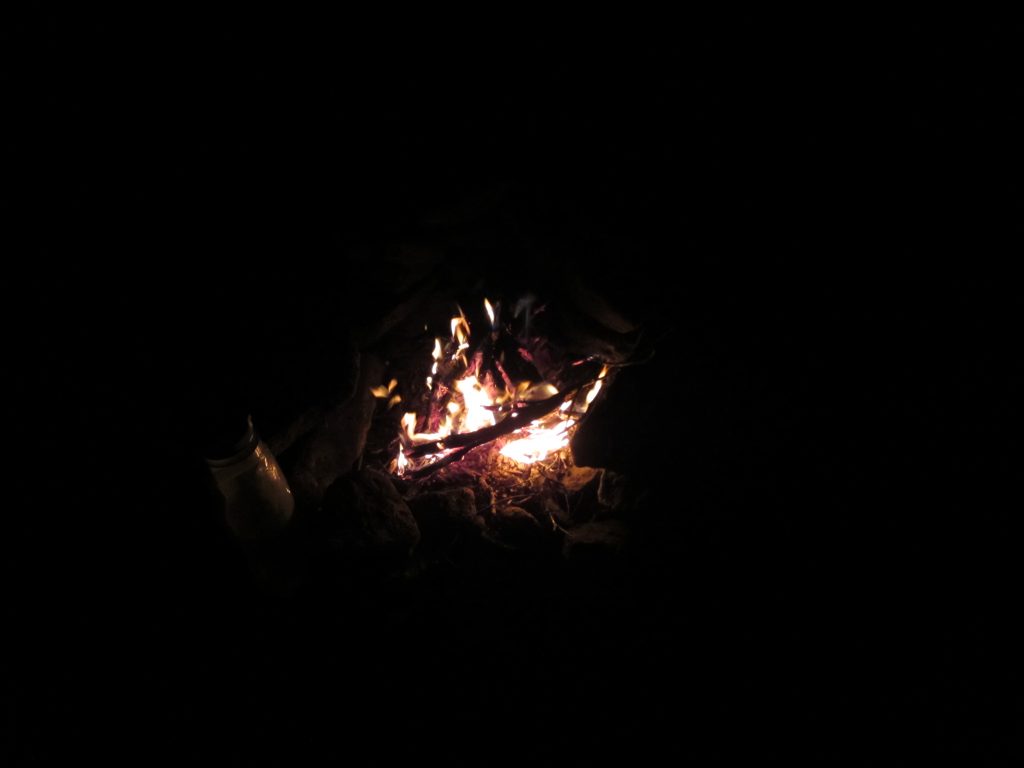 The breeze seemed to keep the heat from escaping the fire ring, and we both decided to call it a night. I have to say, I slept fitfully, and got up at least three times during the night. At one point it sounded like it had started raining,and while I normally like sleeping in the rain, I jumped up in a panic. Neither of us had thought to bring microspikes, and if it was raining it would freeze and turn the trails to a sheet of ice! As I climbed out of my warm bed I realized it wasn’t raining, although I couldn’t tell you what the sound was I heard on my tarp. Back to bed, heart pounding, waiting for the morning.

Morning finally broke, and we were a pretty efficient affair, eating breakfast and breaking down in record time. The hike out was actually over rather quickly, as it was downhill most of the way. We stopped to snack at the Neversink, and then we were done! Not even a picture to be had on the way out.

All in all,I think we made a good call heading to the Catskills. Our trip over the Burroughs Range last year didn’t leave us warm and fuzzy on the Catskills, but Table Mountain renewed our desire to explore more of the area. I’m sure we’ll be back.