“Like cold water to a thirsty soul,so is good news from a far country.” 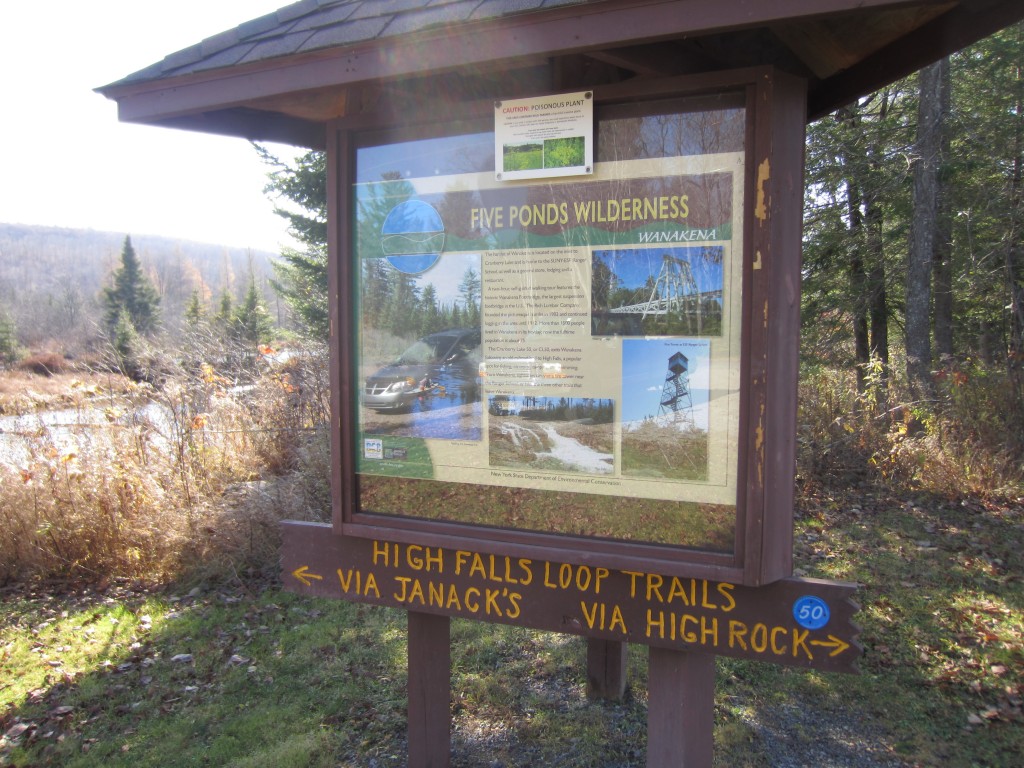 The High Falls Loop in the northwest corner of New York’s Adirondack Park has been on my to do list for about 4 years, and I finally decided to check it out in the beginning of November this year. As I pulled out of my driveway for some reason I though my gps said it was a 298 mile drive. As I went through Syracuse I new something was amiss. A quick check of google maps revealed that it was actually a 410 mile drive! For an overnighter! Yikes! Oh well, only two hours to go sooooo, onward weary soldier. 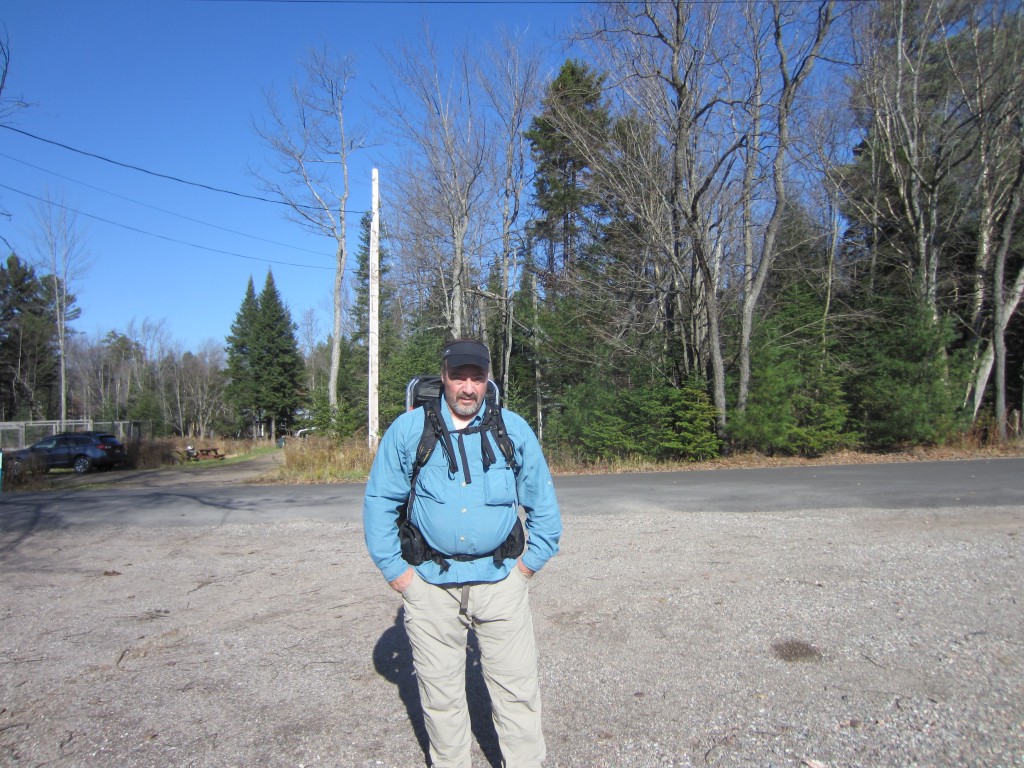 Yes, it was a long drive.

Actually I’ve driven much further for an overnighter. I don’t mind when the trip promises to be a good one. It was a weekday trip, and even though this loop is popular, I hoped for a bit of solitude.

The loop itself is only about 16 miles, and either starts or ends with a short .4 mile road walk. I opted to start on the Eastern Leg with the road walk, just to be done with it. Just as I saddled up a couple came out of the woods; it was Levi Tate and his wife from Hammock Forums. It’s always great to meet other forum members. We talked for a bit and I got the 411 on the trail conditions. The forecast was for wet feet. It’s not like I haven’t dealt with that before, so after some pleasant conversation off I went. 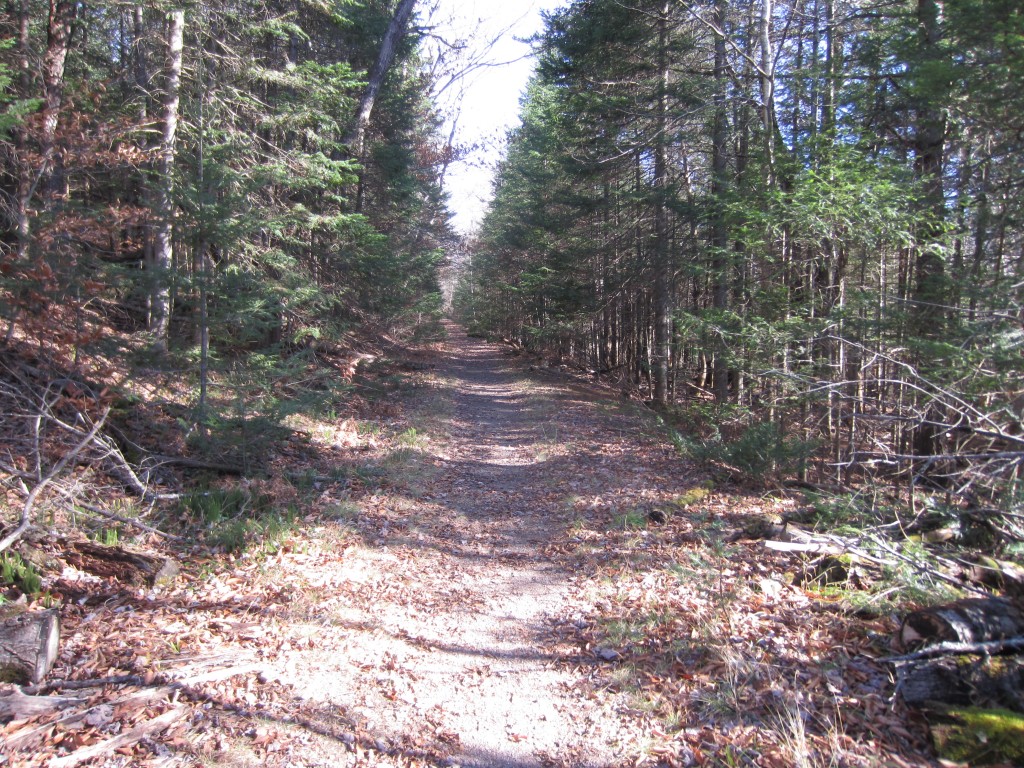 The eastern leg of the loop starts on an old railroad grade from years gone by that used to haul lumber in the area. It didn’t take long before I came to the first wet spot. The plank bridges on the trail were floating and I was going to get my feet wet. Fortunately there were some state workers there diligently working on the beaver dam to try and drain the trail. 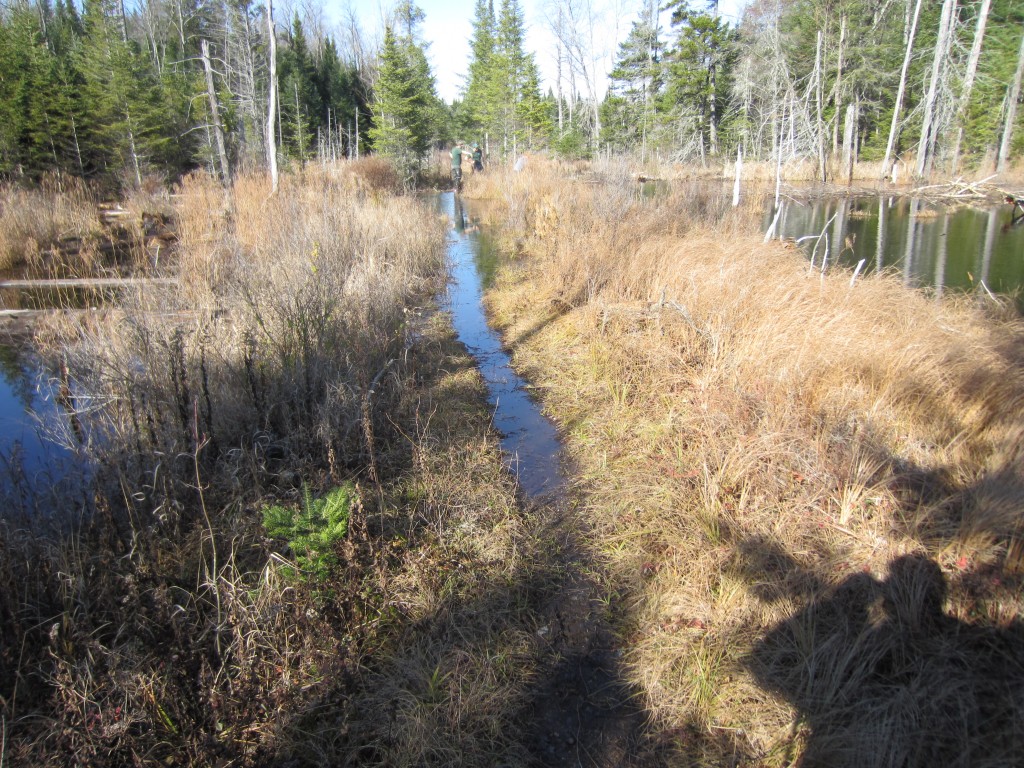 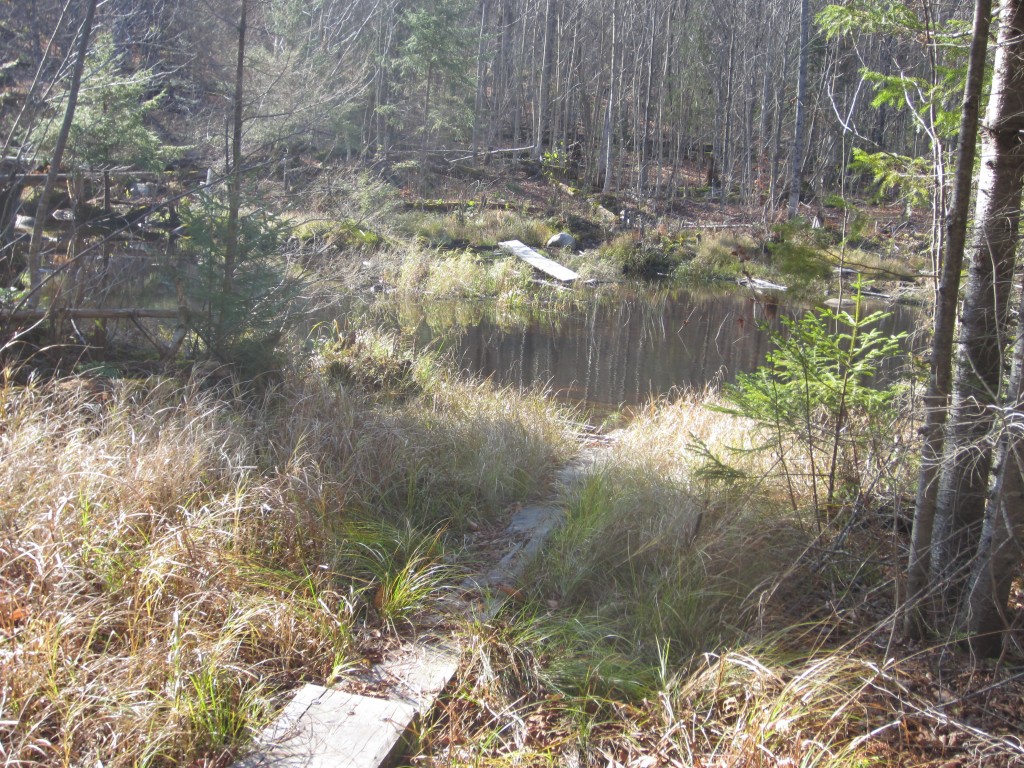 Honestly, wet feet don’t bother me, and I knew they would dry soon enough. Views of Cranberry Lake teased me through the trees, and by the time I reached Janacks Landing my feet were dry. I stopped for a quick snack break and took in the forest around me. The most memorable thing was the smell. The entire trip I enjoyed the scent of the pines trees – I don’t remember if they were spruce or fir, but the smell reminded me of the New Jersey Pine Barrens, near my home. 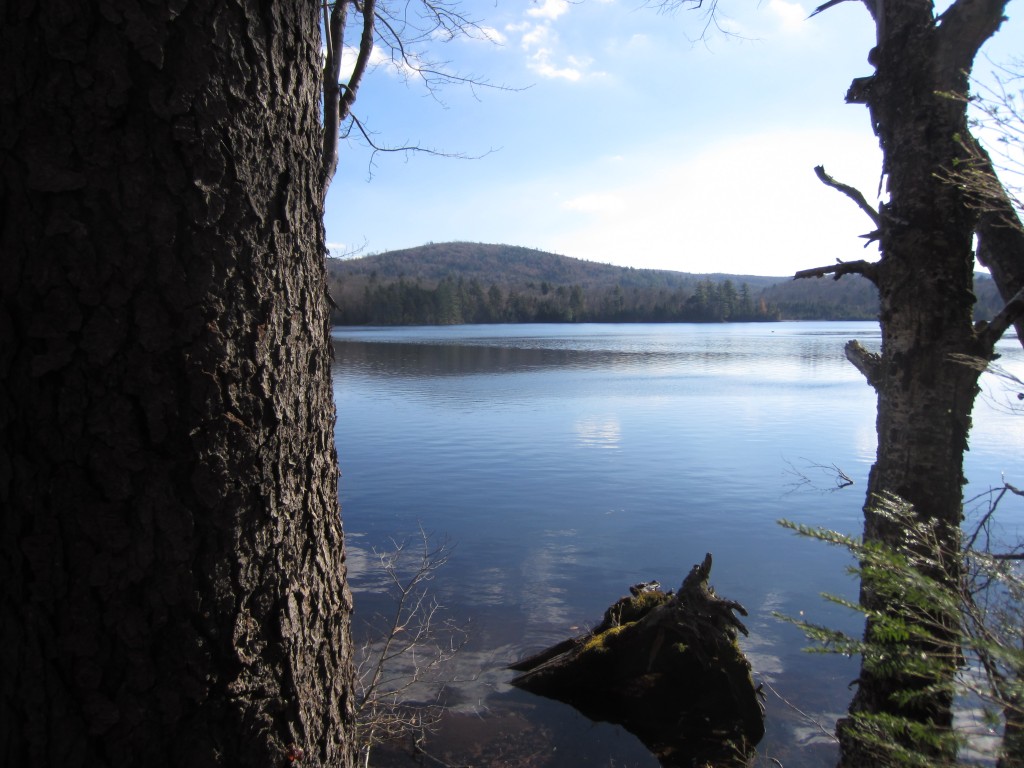 The miles flew by and when I reached the junction to Cat Mountain I was slightly surprised that I had covered 3.6 miles in 45 minutes. Yes, it’s easy walking, but still, the only shape I’m in right now is round. As I moved along there weren’t any views, just the occasional beaver pond, so I was kind of in auto pilot, not really paying attention. Suddenly I realized I was off trail and thought,” I don’t remember  seeing a turn”. I backtracked about 50 feet and sure enough, there was a turn – right onto a tree about 50 feet long that crossed a beaver pond. There was a piece of cord tied from one bank to the other to hold onto, but if you put any kind of pressure on the cord it stretched to the point that you were going swimming! I have to say, for the first 15-20 feet I was not happy. At about the half way point the tree was hewn a little flatter, and finally I was across and glad I was doing a loop. In all honesty, if it were wet and rainy I probably would have slipped and fallen. Whew! 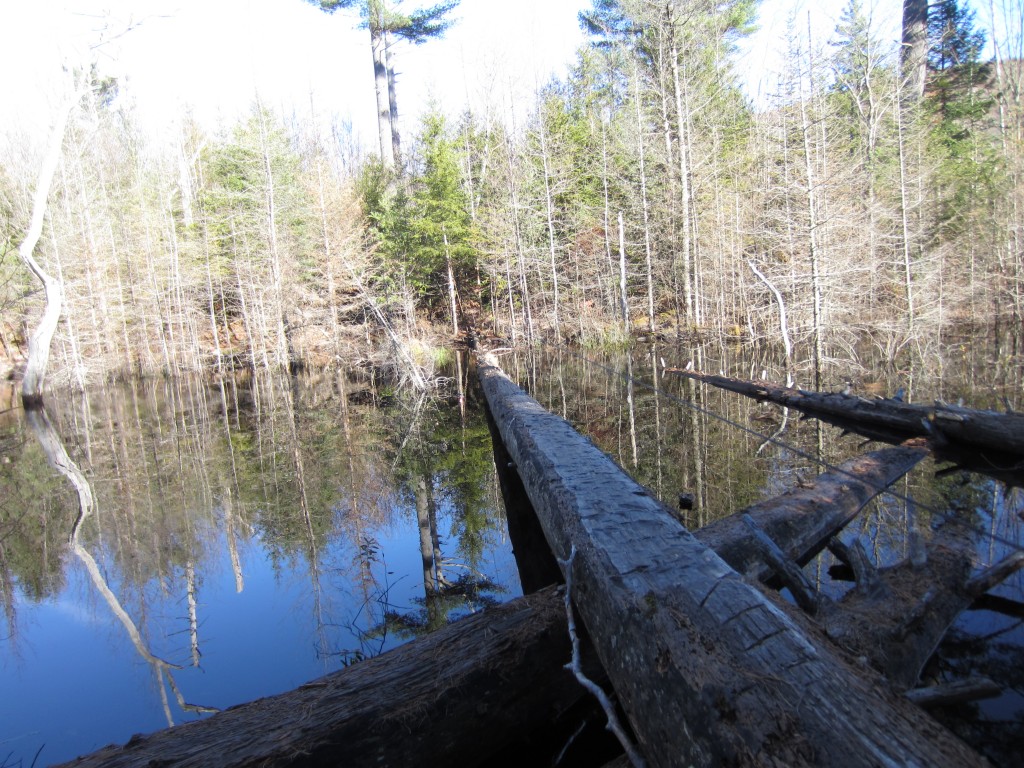 When I finally came to the side trail leading to High Falls I was pleasantly surprised to find that instead of the rocky path following a creek to the falls, it was a nice railroad grade in the woods. It was only .5 mile to the falls but the woods were dead silent. I passed an old piece of machinery used to maintain the railroad, and marveled at all the abandoned equipment I have passed in the Adirondacks over the years. 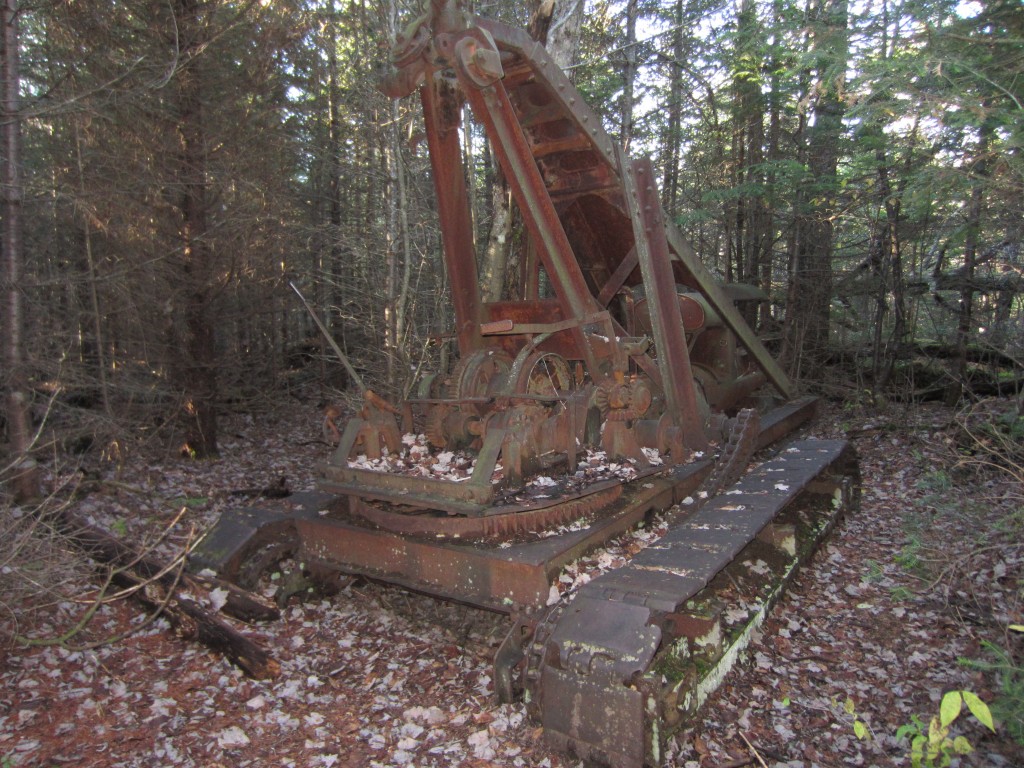 Finally, I heard the beautiful roar of High Falls. The trail broke out of the woods near the top of the falls. There are the remains of an old, long gone bridge that led to High Falls lean-to #2, now inaccessible except by paddlers, and High Falls #1 sits back from about 100 feet in the woods. 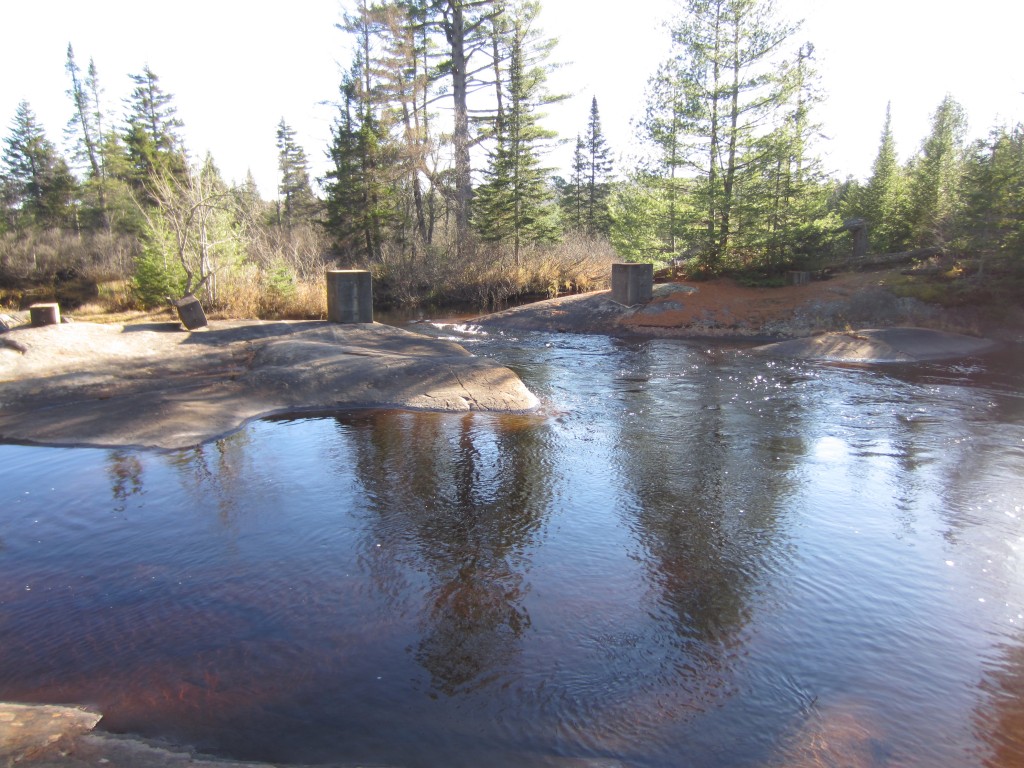 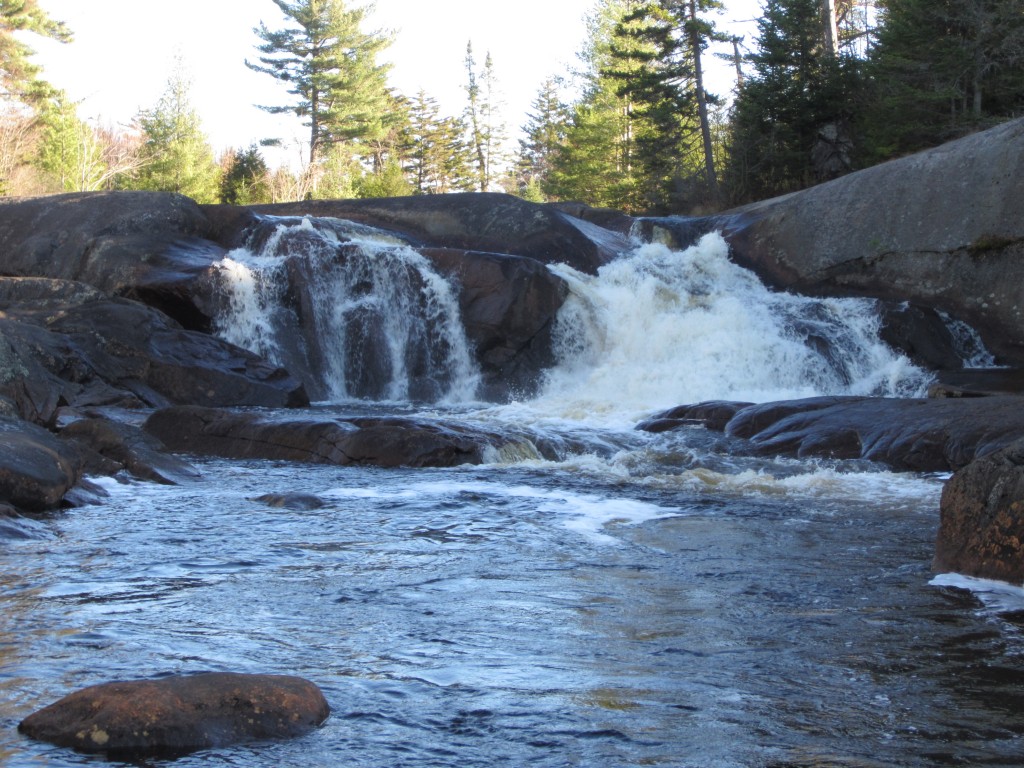 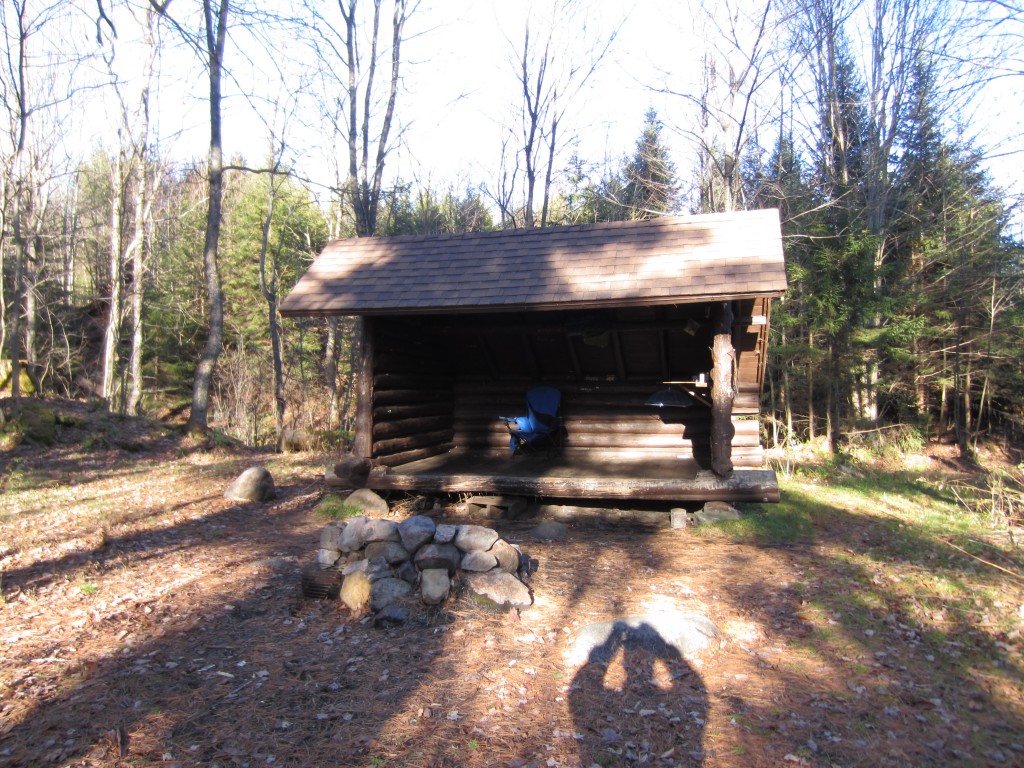 It was a beautiful location, with a privy and multiple campsites, and I can see how this area could get overwhelmed by visitors at certain times of the year.

When I get to camp I like to get all my camp chores done, mostly because I run out of steam at the end of a day of hiking. Today was different in that I wasn’t tired from the walk; the hike only took 2 hours. I was tired from the drive up, but still had a bit energy left.

First order of business was to get my shelter up. This hike would be my first time sleeping in a bridge hammock. I was trying out a Warbonnet Ridge Runner, and I was hoping the extra weight would be worth it. I didn’t have a proper bridge underquilt, so I decided to improvise with a Loco Libre Gear LongHot underquilt. I had brought an old DIY topquilt, since I had loaned all my quilts out, and a HG cuben fiber tarp rounded out the package. 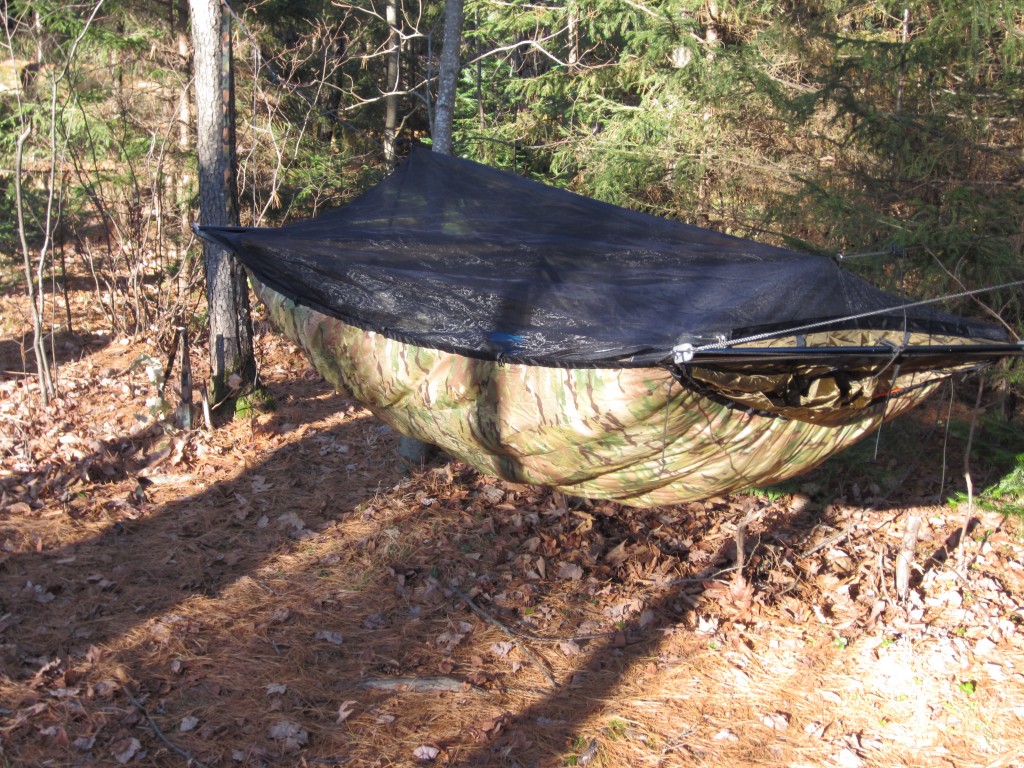 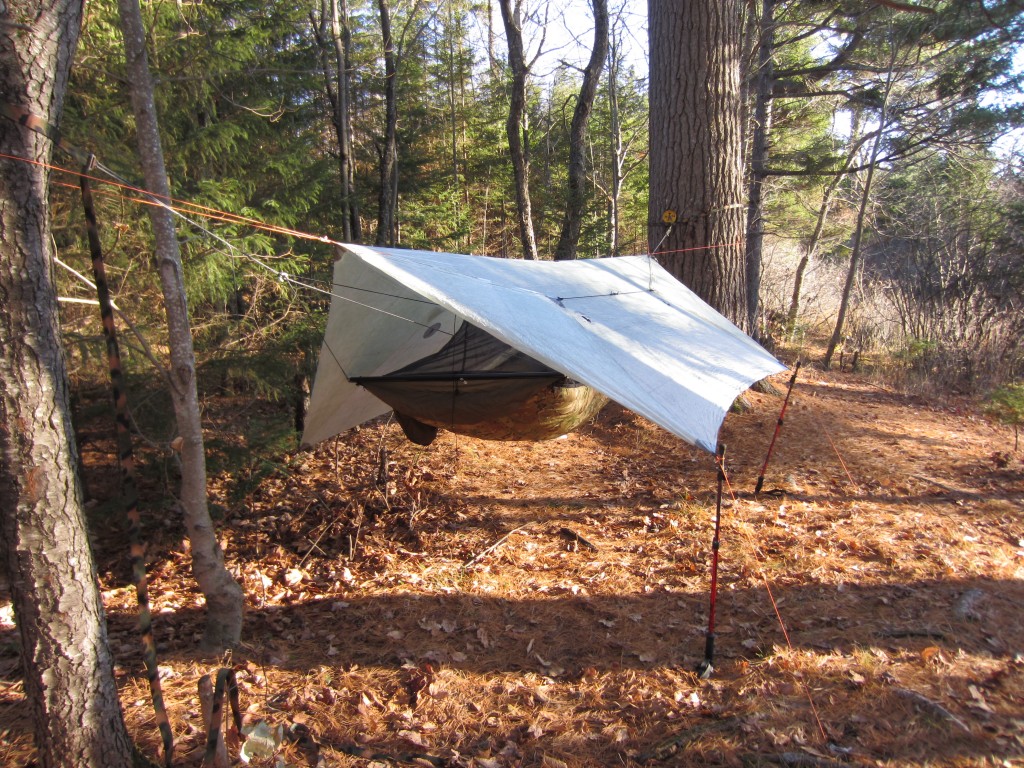 What a great spot! Just far enough from the falls to slightly mute the roar, but close enough to be lulled to sleep. It was everything one could hope for, and best of all I had it to myself.
Next on the agenda was dry clean clothes, and dinner. Since the place was deserted I got changed right at the lean-to while I waited for water boil. I mulled over the idea of starting a fire while my Packit Gourmet Texas State Fair Chili rehydrated, but decided against it. Most of the down wood in the area was pretty damp and I didn’t really feeling like ducking smoke. What I neglected to take into account was the fact that it would be dark around 6 pm and I’d be really bored.

The forecasters on the radio on the way up said the Northern Lights would be visible tonight, and I was excited because I had never seen them. When I hit the hammock around 5 pm  I consoled myself with the idea that  I would wake in the middle of the night to a glorious light display. I was only half right – I woke many times during the night, but no lights. At about 11:30 pm I awoke and my back was chilled. I tried to ignore it (you’d think by now I’d know better), and finally got up with the excuse that I had to”commune” with mother nature anyway. I keep my camp shoes on my pack while I’m hiking with a piece of shock cord with a mitten hook on either end, and after retrieving that and attaching it to the center D rings on the underquilt and over the ridgeline it was like someone turned on the heat. Next time I use the WBRR I’ll have a proper bridge underquilt.

As a side note, this was the stillest, quietest night I have ever spent in any forest. 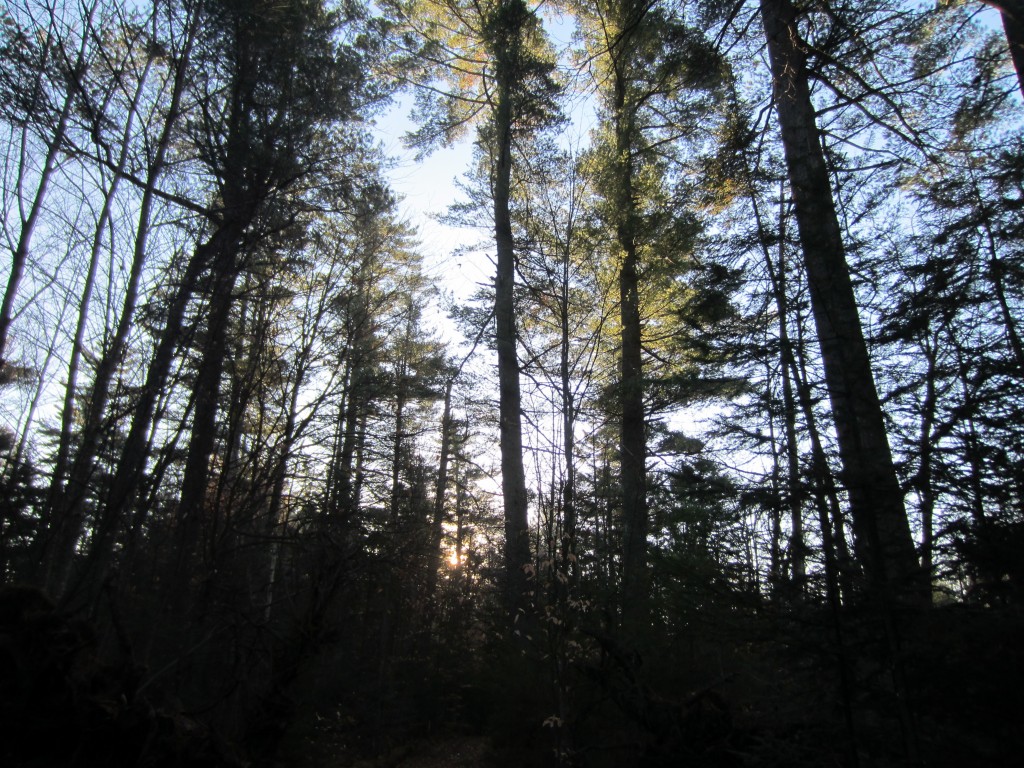 Other than waking about 100 times I had a great night’s sleep (and I won’t mention the dream I had of a serial killer attacking me in my hammock, brrrr). No Aurora Borealis either – double bummer. No matter, I still arose feeling refreshed, and broke down camp before heating water for my breakfast; Mountain House Scrambled Eggs and Ham on a burrito with cheese and Chick Fil A Jalapeno Salsa.

After I was finally packed up and prayed for safe travel I hit the trail around 8:30 am. One last look at the falls and I was off to the races. Most of the todays hike was on another old railroad grade, and it would be an easy day of hiking.

The trail is mostly dry, but there would be much more flooding due to beaver activity. Here’s a hint: if you go somewhere called The Five Ponds Wilderness, you’re gonna get wet feet Jack. In reality even though there was more flooding, there were also more beaver dams to cross on. 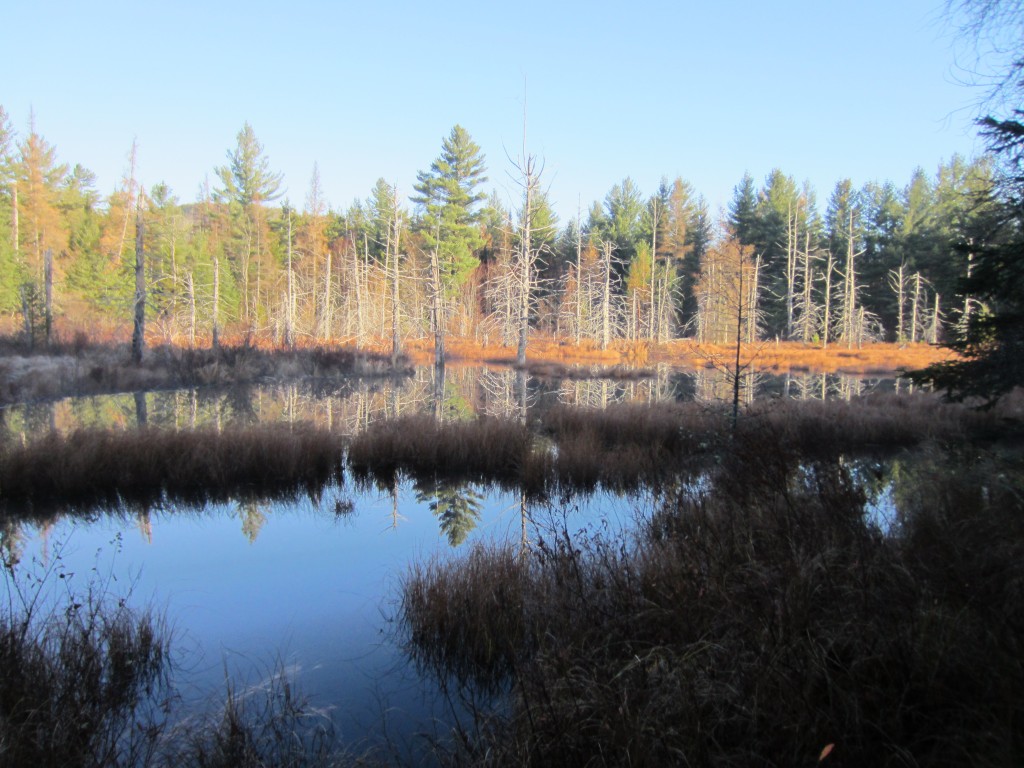 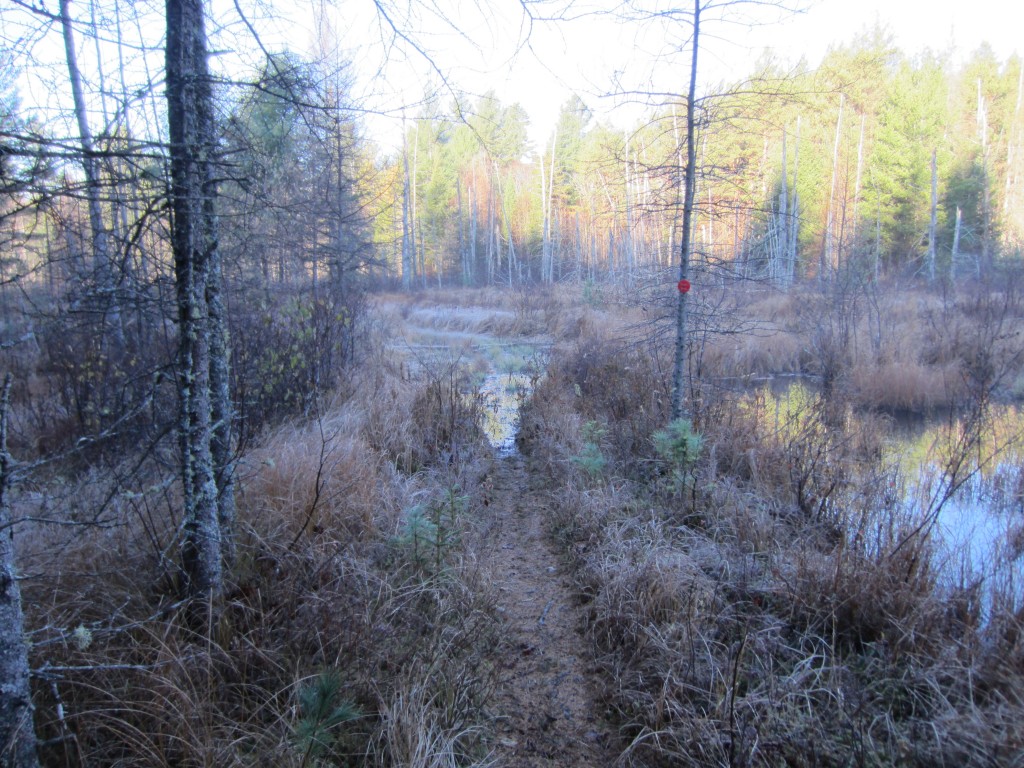 After a bit of flooding the trail ran along the Oswegatchie River, and as I walked along I heard a dull roar – High Falls. I got to listen to the roar of the falls for a few more minutes until the trail dove back into the cover of the forest and I instantly missed it. The trail and river both meander along, occasionally bumping into each other until the Oswegatchie finally decides to part ways for a while, leaving you to be swallowed up by the silence of the forest. 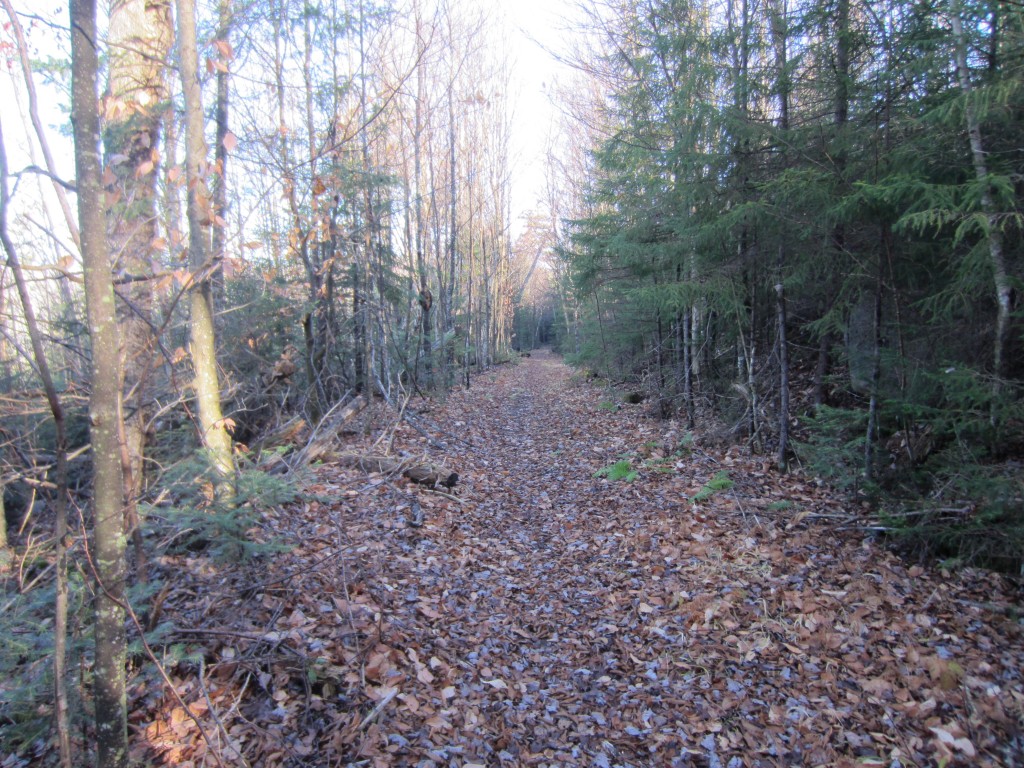 The interesting (or not) thing about this part of the hike is that you can see far ahead on long corridors of trail. The trail is smooth, so you can actually look ahead instead of looking at your feet. I passed the junction to Big Shallow, vowing to one day visit that part of the Five Ponds, and before I knew it I was at the junction to High Rock. 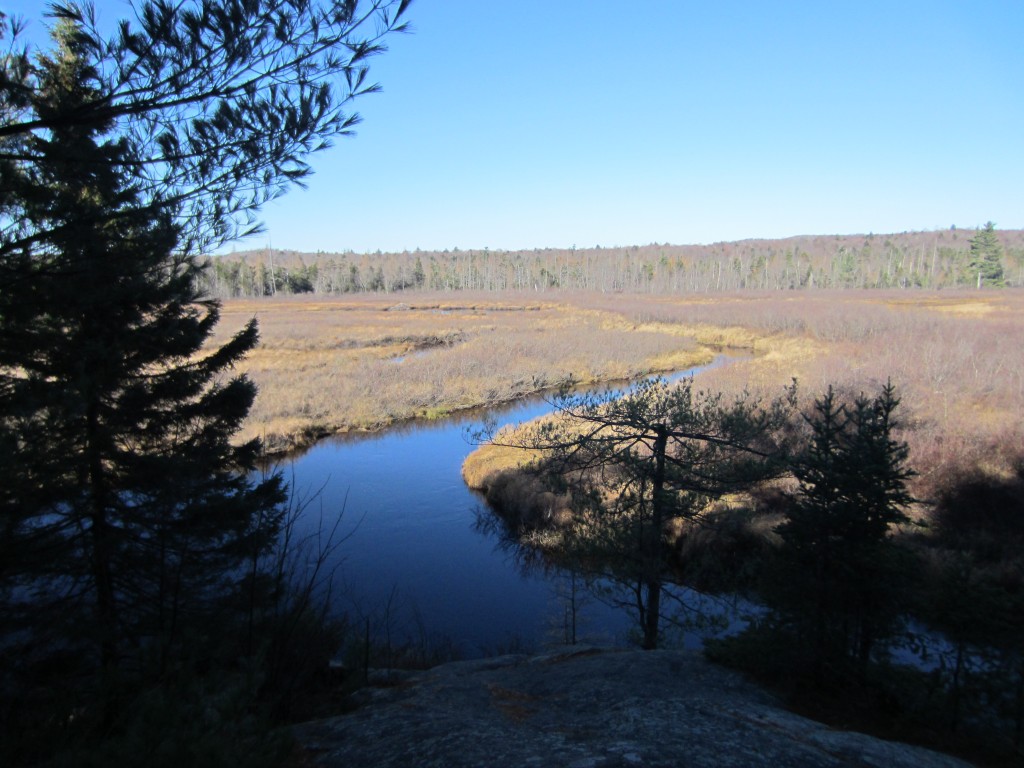 It’s a short .1 mile side trip, and the view is a classic. There are campsites and a privy, but surprisingly no lean-to. It’s a beautiful spot, but only 3.6 easy miles from the trailhead. If you want an easy hike, or don’t mind company this is a nice overnight destination. Me, I’m just passin’ thru.

The rest of the trail from here on out is what I would classify as boring. At one point I was trying to judge distance by comparing the trail to how many blocks that would be in my neighborhood. Maybe I’m better off not being able to see ahead, lol. 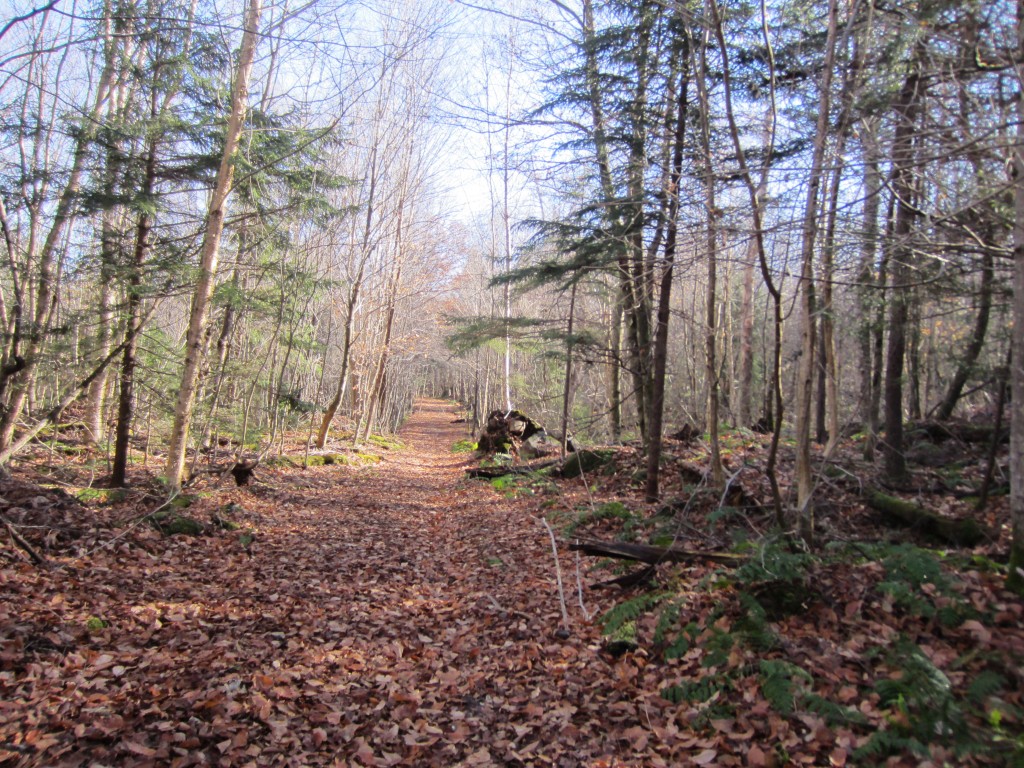 Aaaah, that’s about one and a half or two blocks I’d guess………

Finally I could tell I was at a low point; the ridge on the right disappeared and the Oswegatchie River appeared in a marsh on my left. One last flooded spot to squish through (thank you very much Mr. Beaver) and that was all she wrote. The time was 11:30 am and when all was totalled I would drive about 13 hours to hike for 5. In my opinion it was very worth it.

All in all it was a nice, easy, peaceful trip. I didn’t pass anyone on the trail in two days, and although some of the walk can be a little monotonous, I’d like to come back. If I can find the time I’d like to dust off the pulk and snowshoe to Cat Pond this winter (as well as climb Cat Mountain) and I’d also like to do a 4-5 day trip traversing the entire Five Ponds Wilderness.  As always, so many trips, so little time.