“20 And the Lord said to Moses, “Rise early in the morning and stand before Pharaoh as he comes out to the water. Then say to him, ‘Thus says the Lord: “Let My people go, that they may serve Me. 21 Or else, if you will not let My people go, behold, I will send swarms of flies on you and your servants, on your people and into your houses. The houses of the Egyptians shall be full of swarms of flies, and also the ground on which they stand. 22 And in that day I will set apart the land of Goshen, in which My people dwell, that no swarms of flies shall be there, in order that you may know that Iam the Lord in the midst of the land. 23 I will make a difference between My people and your people. Tomorrow this sign shall be.”

We all have one – that one backpacking trip you’ve been dreaming of for a very long time. That trip you’d give anything to go on. I have wanted to hike to Sand Lake Falls in the west central Adirondacks ever since I bought An Adirondack Sampler II by Bruce Wadsworth back in the early 90’s. Out of all the trips in that tomb of Adirondack gold, Sand Lake Falls stood out to me like a beacon on a clear dark night. Well, after 20+ years of thinking about it I finally decided to make my dream hike happen. Only one hitch. No big deal really, I just had to leave my brain home. Now I hear you saying “how do you leave your brain home?”. Ask your wife or significant other and I’m pretty sure they can name at least one time when you went brainless, so I’m sure it’s possible. Actually, it’s more like you overlook or disbelieve every logical piece of info you receive, or otherwise craft it to fit whatever truth you hope for.

On this particular outing I started by breaking my number one rule of backpacking – no trips in July. I will hike any of the other eleven months, but July is a no-no due to heat and bugs. I then justified it by telling myself that the Adirondacks were going to be much less humid than the lousy weather we were experiencing in southern New Jersey. I then backed it up by consulting the ultimate story tellers – weather.gov. Come on, weather men who work for the government? Really??? Then, just to make sure my brain was thoroughly in neutral, I left without a bug net. What could go wrong? 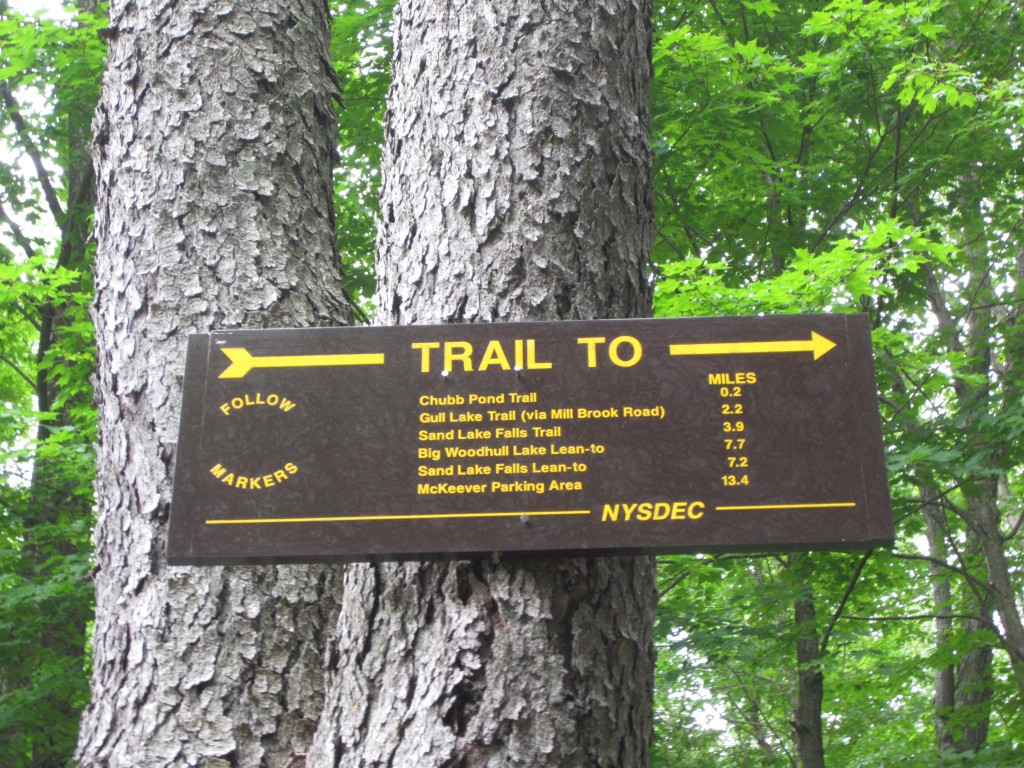 By the time I made the drive up it was about 11:30, and after changing and chatting with a fellow hiker in the parking lot who was heading to Chubb Pond, I was off around noon. The hike starts off on a nice jeep road that eventually becomes a rutted ATV trail. Can’t really complain here because the road is used by some of the hunting camps in the area, and a portion of the trail is routed away from the road for  a little bit. 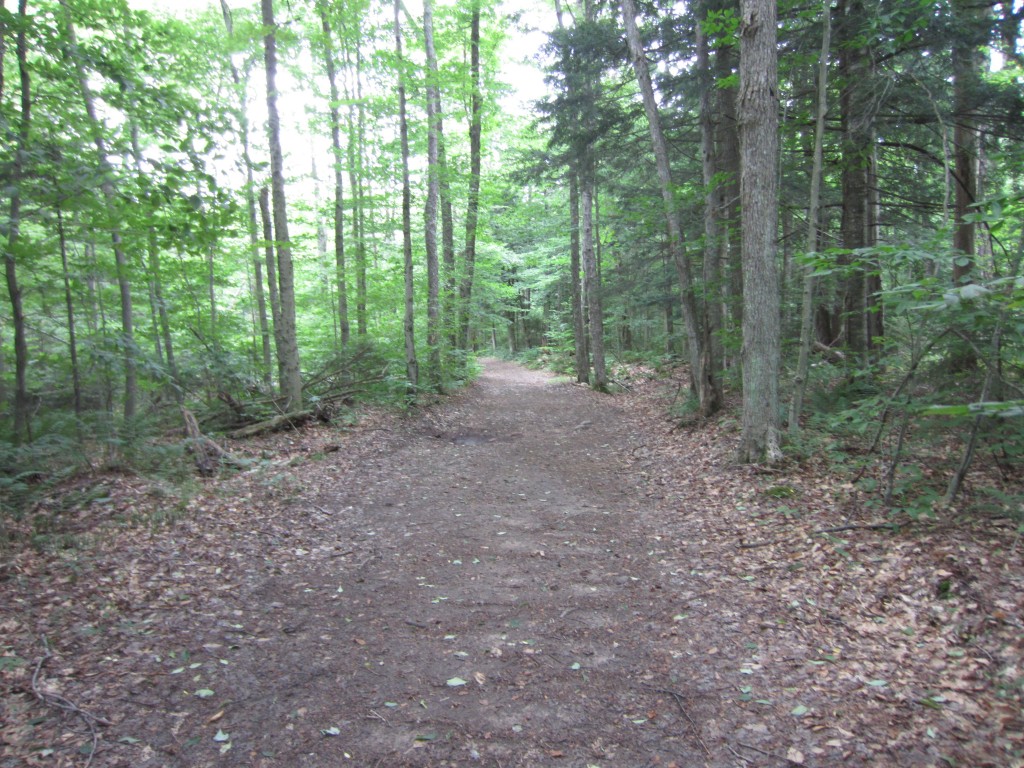 I don’t remember much about this section of the trail because reality came running up behind me and smacked me in the back of the head. The mosquitoes and gnats were intense beyond annoying. I tried to out hike them :), and by the time I got to the Village of Millbrook (population zero in case you were wondering) it was time for a fix. Banadana on- check. Roll down sleeves – check. It’s 85 stinkin’ degrees- check. Where’s my brain – at home – check. That’s better, I’ll just melt my way to Sand Lake Falls. 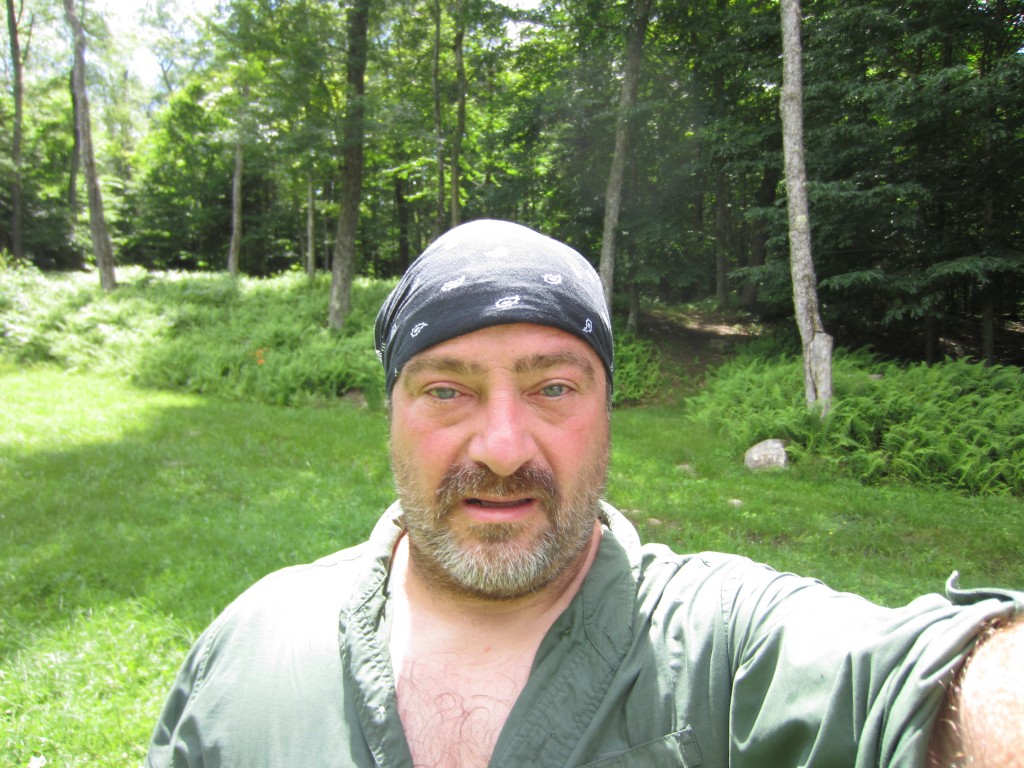 Do I look brainless to you?

After a quick lunch I headed out with my new adjustments doing a dandy job. The next section of trail between the Village of Millbrook and my destination wasn’t without it’s challenges, but it still seemed to go by rather quickly. The first hundred yards or so are kinda vague and boggy. 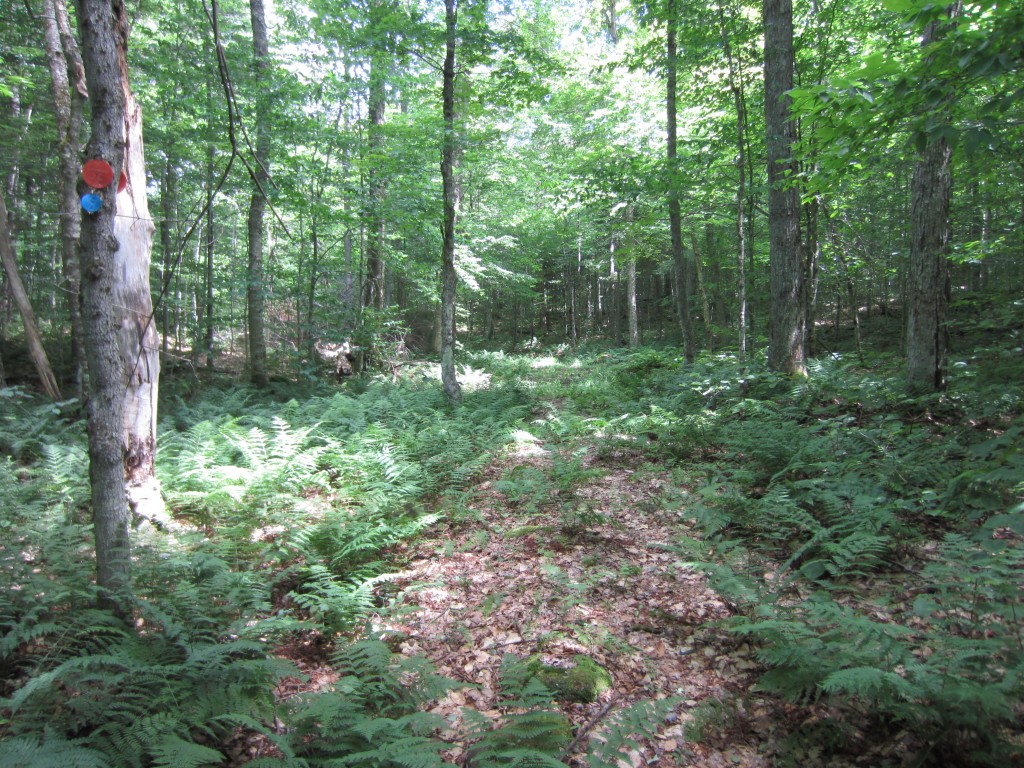 Then the next couple of miles alternates between nice trail and nasty bogs, with deep sucking mud.

The final mile or so to the falls was my favorite, since it was nice dry trail. Once I realized I was on the final downhill I listened, and there it was. The unmistakable roar of the falls. There is no better energy booster than knowing you’re almost there! 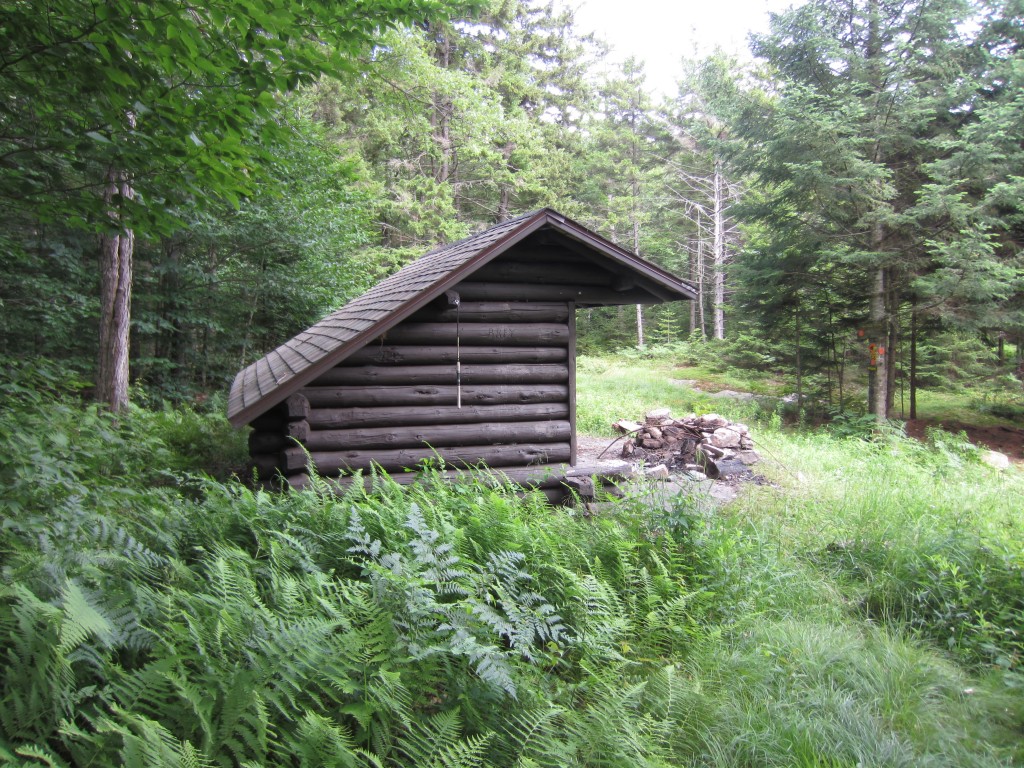 I have to say, for all my whining up to this point, wow! A picture perfect campsite if I ever saw one. Kudos to Lean2Rescue for such a beautiful job restoring the shelter. And not but 100 feet in front of the lean-to was the prize – Sand Lake Falls. The falls were more beautiful than I imagined! Their roar would later lull me to sleep – one of the best nights sleep I’ve had in a long time. It’s a blessing and a pity that this site sees so little use. Here it was, July 13th and the last journal entry was from May 29th, and they were passing through. 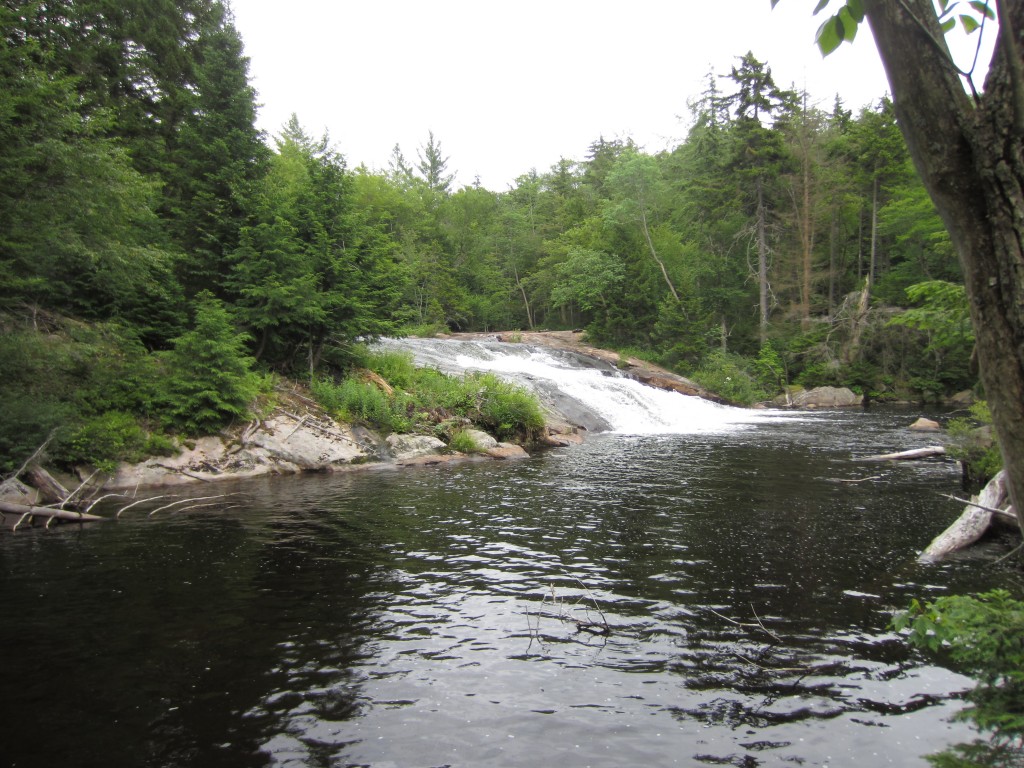 After taking in the surroundings I decided to check out the lean-to and to my surprise and concern, muddy bear tracks! In one side, mulling around, and right out the other.

All I could do was hope he was a passerby, and not a regular. I started dinner on the picnic table outside the lean-to. While I was waiting for water to boil I set about hanging my hammock in a nice stand of trees up the hill a little ways from the lean-to, and searched out a good spot to hang my food. Since I knew for certain bruins were close by I was going to be extra diligent about my camp triangle. 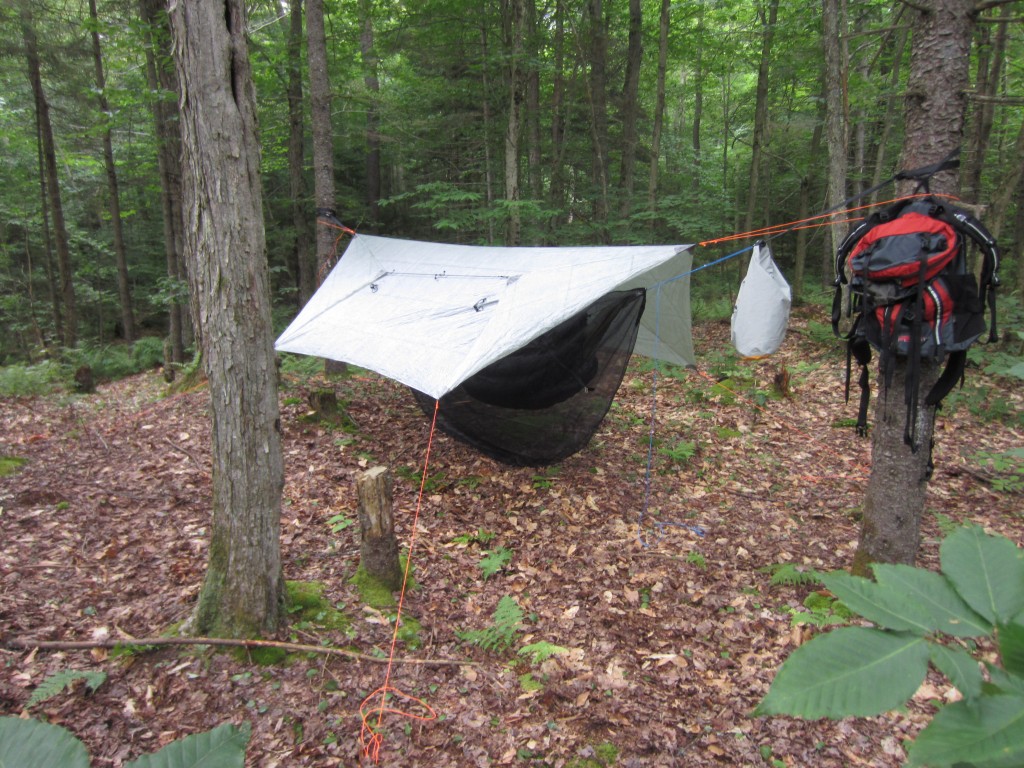 At least I brought a bugnet for the hammock!

I enjoyed a dinner that consisted of tortillas stuffed with Mountain House Chicken Fajita Filling, which I have to admit was very tasty. It had plenty of roasted vegetables and chicken, without a lot of filler. I’d definitely do that one again.

After finishing up my camp chores there was nothing left to do but sit around and feed the bugs. I decided instead to hang out in my hammock, listen to my ipod, and read. It was about 7 pm, and the big problem was it was still about 80 degrees. I spent the next hour sweating until it occurred to me to slide my underquilt out from under the hammock. That did the trick. I dozed off sometime around 9 and woke up at one point just to pull my sleeping bag over me, at which point I slept like a baby, lulled by the sound of the falls.

I was up early, and walking by 7:30 am, hoping to beat the heat and the bugs. With a great nights sleep I had a much better attitude and appreciation for my walk out. That is until I stepped up to my knee in a sucking mudhole. I couldn’t get me shoe out with my foot, so I had to bury my arm up to the elbow to get it out. 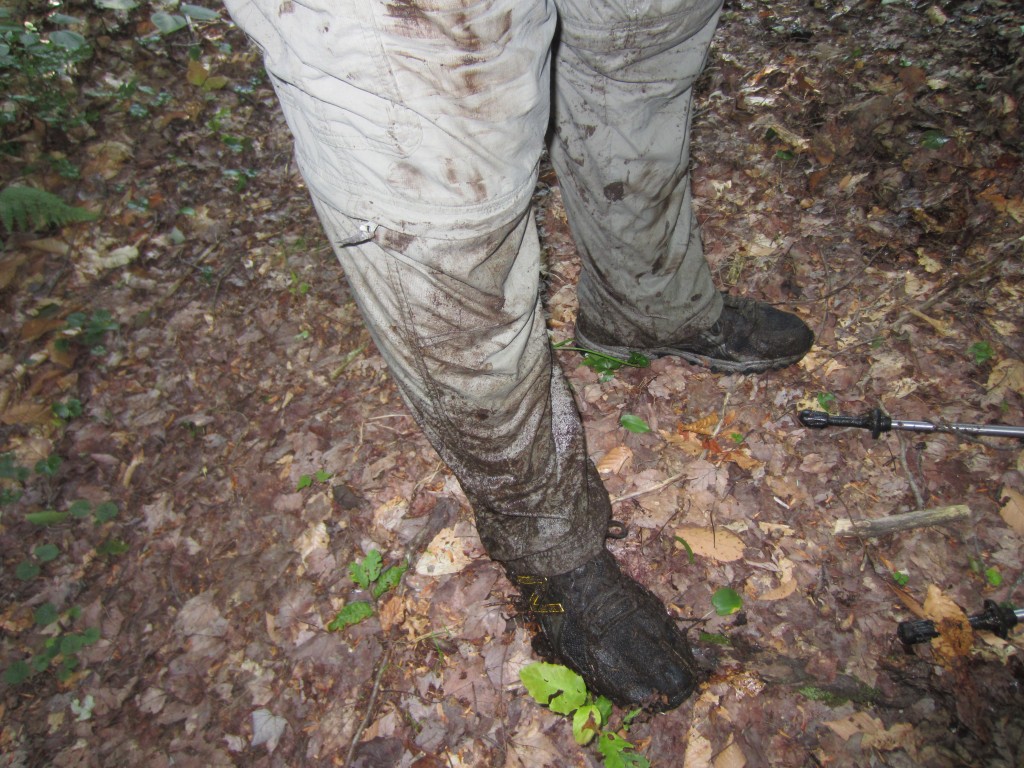 They pay big money for this at those fancy spas….

Oh well, my sock needed to be fixed anyway, so now I didn’t have an excuse not to. Shake it off, move along, 10 minutes later squish – I slipped off a log and buried the other leg up to the knee. Right about then I was thinking’ “Give me a break!” and as I pulled my leg out the shoe came with it. That was my break I guess. I looked down and I had to laugh because now I was “even”.

Once again I took a break at the hunter’s camp at the Village of Millbrook. This time there was the remnants of a fire from the night before, an ATV, and empty beer cans. I called out to let someone know I was here. No one answered so I figured they were sleeping it off. I wolfed down a quick meal and was on my way before I became a nuisance to a groggy camp owner.

The final miles flew by and I was back to my truck by 10:30 am, completely soaked by the humidity. I was never so happy to get into clean dry clothes.

When I finished the trip I swore I’d never go back again. Now that I’ve had a few days to reflect, I think I’d go again in the right season. Maybe next time I’ll even bring my brain.