“One person esteems one day as better than another, while another esteems all days alike. Each one should be fully convinced in his own mind.” 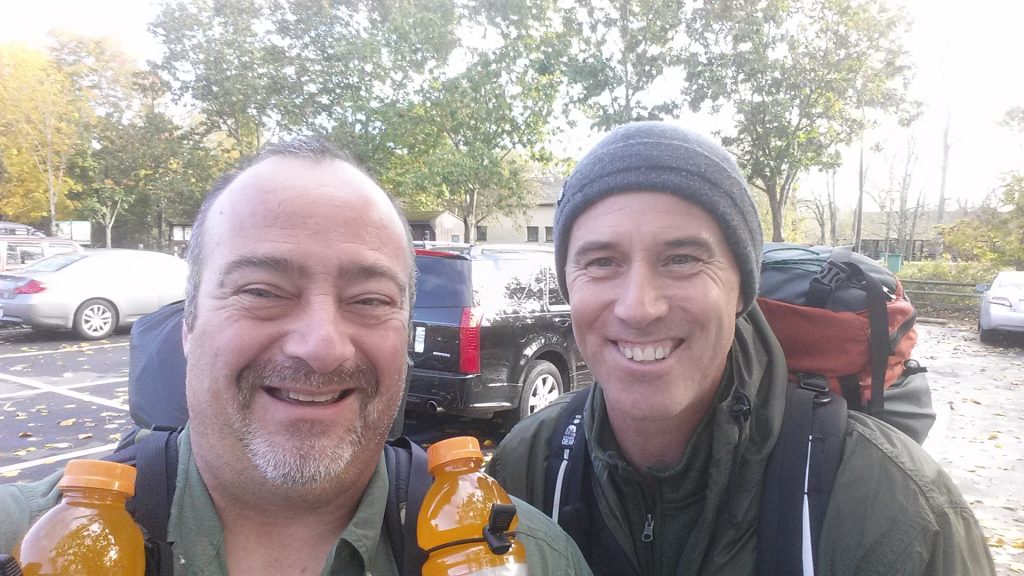 Matt and I hadn’t been out since our hike to Table Mountain in the spring, and while we were long overdue for adventure, we were short on time to get away. Fortunately for both of us we live just 30 minutes (19 minutes according to the GPS, yeah right) from the New Jersey Pine Barrens.and the 1.1 million acre Pinelands National Reserve. I’ll apologize here and now because I really didn’t take any pictures this trip, except for the few I’ll post in this story. I just wanted to walk and not really think about anything extra, but now that I put word to page I realize that the simple beauty of this area deserves better.

We checked into the office at the historic village of Batsto and picked up our permit for Mullica River campsite #8, and by 2:30 or so we were walking. The first part of the hike passes through historic Batsto village, with it’s mansion, iron works, and mills, and you get a peek at what life was like in the 1700’s and 1800’s. After passing beautiful Batsto Lake you finally get to the Mullica River Trail. It’s just a short 4 mile walk to the campsite, with the trail alternating between walking on sugar sand roads and brief forays into the forest on a trail covered in a  bed of pine needles.

About 1 1/2 miles in we came to Cornwall Bridge and had to figure out which way the trail goes; there is a detour because one of the bridges near Batsto is out. It didn’t take too much thought, as we realized we needed to stay on the same side of the river to get to camp. Still, I can see where someone could get turned around and would be surprised to find themselves back at Batsto!

For those of you who have never hiked in sugar sand, the roads in the pine barrens alternate between packed sand and loose sand like walking on the beach. Loose sand is a bit more difficult to make time on with a pack, but fortunately it is only a small part of this hike. The sections that actually turn to trail are some of the nicest to hike on, and I wish an effort was made to place more of the trail off the roads.

One big plus on this trail is the last mile to camp is designated a wilderness area, and no motor vehicles are allowed. The Mullica River campsite is designated primitive travel only, so the only access is by foot or canoe. As we neared the camp, Matt and I started to get views of the Mullica River, it’s waters stained by the tannin from the pines that line it’s banks. After just 1 1/2 hours and 4 short miles we reached camp. 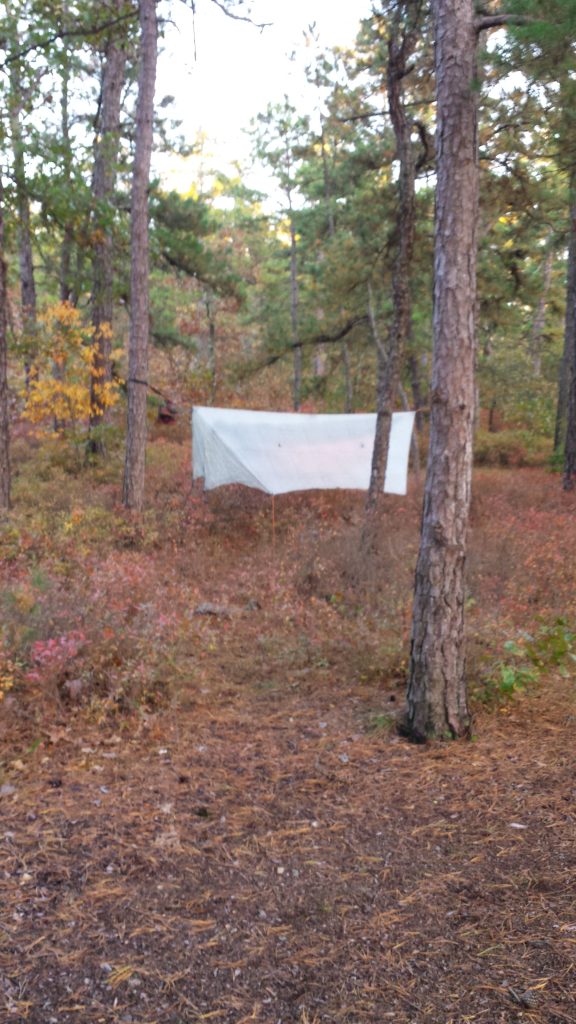 Me, dressed in cuben fiber

There were a number of other people at camp, including a LARGE number of boy scouts, but since were at the far end of the campsite it was still pretty peaceful. It would be dark soon, so we set about slinging our hammocks, and as darkness started to settle in Matt and I ate dinner. After eating, we took a stroll through the area to see the scope of the site. There a couple of privies, and a hand pump that doles out some of the best water, despite the tannin stained river just a few feet away. One of the reasons the Pinelands have been protected is because they help recharge the 17 trillion gallon Kirkwood – Cohansey aquifer, containing some of the purest water in the United States.

There were a large number of boy scouts,hooting and hollering and doing what boys in the woods do, and while it’s nice to see young men getting out and experiencing the joys of camping, we quickly retired to our fortress of solitude. Matt had carried in a couple of knock off fireplace logs since we knew the wood in the area would pretty much be picked over, and didn’t want to carry them out. Unfortunately, they didn’t want to burn. Ugh. What they did do was billow some obnoxious burning chemical smoke, and when, and only when we found enough sticks to get a small fire going could we actually get them to burn. 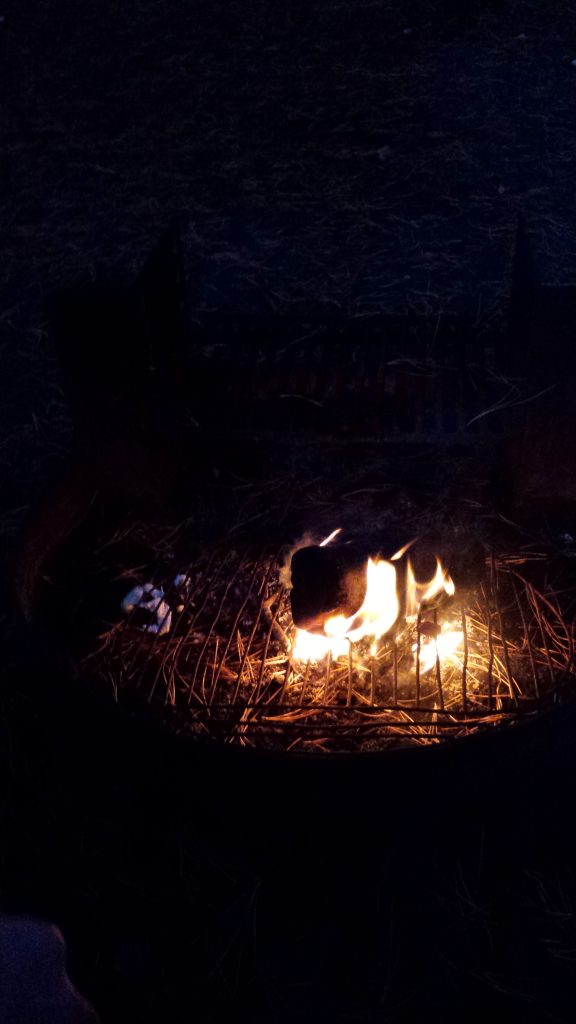 Perserverance pays off, and our meager fire lasted long enough to allow thoughts of sleep to overtake us. Once in the rack, I had one of the best nights sleep I’ve had in quite a while.In fact, I didn’t get up once until morning. Once the sun starts to hit my tarp I can’t really sleep anymore, so I got up and took a walk.The scouts were up and about,which was a good thing since the water pump made a terrible squeeking sound as I filled my water bottles. Back at camp, Matt was still out, so I went about eating breakfast and packing up. Finally, I walked up the hill to Matt’s site, only to discover he had been awake for a while, but didn’t want to disturb me! We sat and talked about nothing in particular as Matt ate breakfast, and even now I marvel at how talking about nothing among friends can be so relaxing.

By the time Matt packed up we were strolling out of camp at a leisurely 10 am. The walk out flew,with more conversation about nothing, mixed with matters that maybe were about something, but all in all who could recall? Before we knew it Batsto village emerged from it’s hiding spot in the forest, and we were done.

Who knew 21 hours in the forest could be so revitalizing? We made a vow to do more trips like this when life tries to keep us bogged down. We might not always be able to get out for days on end, but when it’s hectic, I’ll find a way to take a DIAD (done in a day) trip!

“Let them give thanks to the LORD for his unfailing love and his wonderful deeds for mankind, for he satisfies the thirsty and fills the hungry with good things.”

I apologize for the slow year of blogging here at WWTS, but I can assure you we have much to give thanks for! Thank you to all who have visited and journeyed along with me on these pages. I hope to get back to  a more consistent rhythm of posting going forward, as I do have plenty to say, lol.

God Bless each and everyone of you, and may God fill you with more than just a good meal, but with a filling of a heart of gladness, and heaping helping of the Holy Spirit.