Hi Everbody! I was reminiscing about my first trip to the Adirondacks in my adult years. which I had chronicled in a blog I used to write. I decided to share it here for your reading pleasure. This post is from September of 2010.

Last weekend my buddy Dean and I decided to hit the Eastern High Peaks in the Adirondacks. This would be my first trip to the area in about 32 years, since my scouting days, and Dean’s first. This time I was really feeling my age – after working all week and driving 6 hours on 2 1/2 hours sleep I was a bit ragged. On top of that I’ve been nursing a torn miniscus since April. No snivelling, just a little history.After spending way too much time in Keene eating breakfast we finally hit the Adirondacl Loj arount 10am. The only problem is that the trailhead filled up around 8am, so we were forced to park about a mile down the road and hike back to the park. 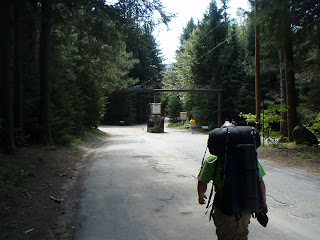 It should be noted here that the Eastern high Peaks area requires the use of bear cannisters, and more specifically the Garcia cannister. It seems the bears have figured out how to get into the the Bear Vault by unscrewing it with their teeth and claws. Clever beasties they are. Since I am primarily used to bear bagging PCT style I rented a Garcia for the reasonable fee of $5.00 for our 3 days out. 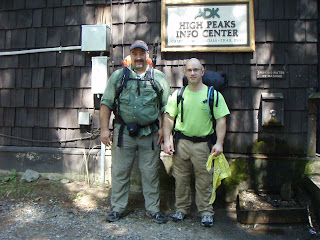 Our itinerary for this trip was Adirondack Loj to Wallface lean-to, then Wallface to Colden Lake, and finally Colden Lake back to the Loj, a modest 20 mile trip. My goal was not big miles, since I knew my knee would not tolerate too much abuse, but rather to take in a leisurely 3 days in some beautiful country. The beauty of the loop I chose is that if things didn’t work out as planned the trip could be modified to suit current conditions. Good thing because not one single day went as planned. 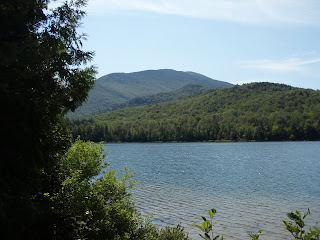 After a late start it was finally good to get on the trail. We made our way around beautiful Heart Lake and set our minds free of all our cares as we enjoyed some of the most deafening silence I’ve heard in quite some time. The trail was nice and the weather was picture perfect. After a bit we came to a side trail to Rocky Falls. I’m a sucker for waterfalls so we made the side trip and took a break to enjoy the roar of the water. 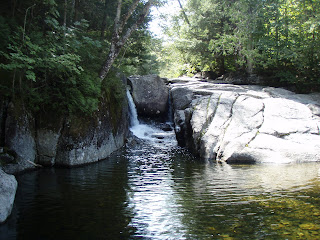 We tore ourselves away from what on any other day might be a great spot for a nap, only because we still had a good way to go. By the time we hit Scott Clearing it was becoming obvious that we would have to push just a little harder than my knee would allow to make our destination before dark. Dean and I assessed our options and decided that we would rather relax and make an early camp. We came here to do something I haven’t done in a long while – to hike and camp without pressure or goals. We would just see where the next few days would lead us.

While heating water for dinner a chipmunk decided to join us, and he definitely had his eye on a quick snack. Chalk up another plus for the Garcia. I hated carrying around an extra 2 1/4 pounds of plastic, but love not worrying about critters feasting on my goodies. In the time it took for my dinner to rehydrate I had the tarp and bivy up, and mr. chipmunk was jealous as I wolfed down my Mountain House lasagna dinner. 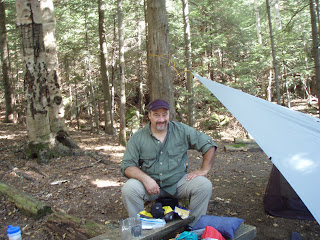 All summer I’ve been putting a prototype of my new tarp through it’s paces. I must say, it’s one of the nicest 8×10’s I’ve had the pleasure to use, and will be a replacement for my favorite Oware tarp. 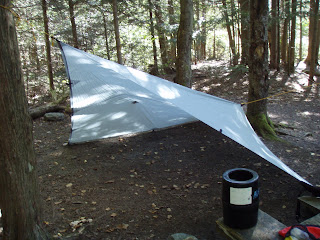 After we were settled in Dean and I took in the views of Wallface Mountain from the stream bed near camp. We were camped near the rockdam and there was even a pool deep enough for Dean to swim and go under. How I have missed these simple pleasures. It’s nice sometimes to change gears and not be so goal oriented.

Right before bed we shared some time in Proverbs and after some time of worship it was lights out. I went out like a light and when I awoke in the dark I checked the time on my Ipod – 9:48pm! I thought it was much later and fell in and out of sleep all night. When the sun started to peek it’s head I checked the time again, only to find my Ipod said 11:59pm! Apparently it was about 6 hours off :).

We had talked with a fellow by the name of Tim, and his mother Joan, who were also from New Jersey. They had camped near us, and now Tim was helping us with his 7+ years of High Peaks hiking experience. He suggested to us that our route through Indian Pass was one of the more rugged ones in the area, and that we might consider taking Cold Brook (formerly Algonquin) Pass over to Colden Lake, then along the Opalescent River to the campsite at Lake Arnold. This sounded reasonable, so we changed plans. In hindsight it would have been much better if I had shared with Tim about my bum knee, but why let your limitations spoil a good plan, eh? After our morning devotions we were off to chase our new adventure. 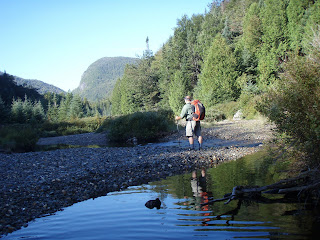 Up to this point the trails had been very nice and not so rocky, but the trail over the pass was a whole different ball game. It was reminiscent of the trails I so know and love in Maine and New Hampshire on the Appalachian Trail. The trail was lightly used (we didn’t pass another soul) and steep and rocky. The seemingly never ending climb was highlighted by some small but beautiful waterfalls. The trail crested at a high boreal bog, complete with a boardwalk and views of Colden Mountain. 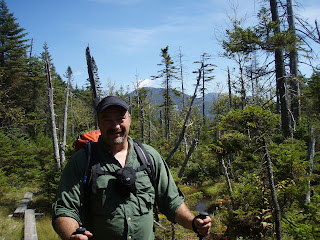 As steep as the climb was, the descent was even steeper and rockier and at times trying. Like I said, just like Maine and New Hampshire. I had to stop at one point and catch my breath, and say a little prayer for patience, since my pace was about half of what I’m used to. This was the only part of the trip where my pace was really off, probably because I was trying to lessen the strain on my knee while going downhill. 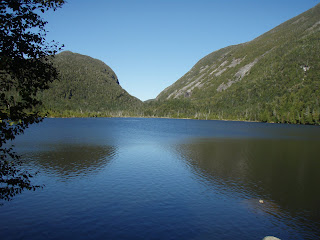 At this point it was once again decision time as to where the path would take us. We could either stay put at the shelter and enjoy a swim in Colden Lake, continue on our current route, or hike over Avalanche Pass and camp at Avalanche lean-to, giving us an easy day three. I really wanted to stay put and swim, but my better judgement told me to give myself an easy third day. Dean agreed that whatever I was up for doing was just fine with him. Dean has been a great hiking partner, and I think that comes from a simple love of the outdoors, along with a hang loose, whatever it takes attitude.

The trail to Avalanche Lake was relatively easy, and soon enough we were at it’s lower end. 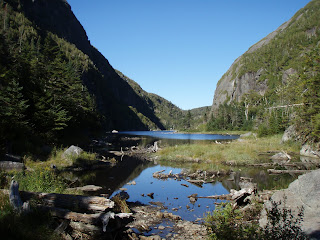 On both shores the mountains tower over the lake, and touch it’s shores with vertical cliffs. This marks the beginning of the boulder scrambles using ladders to get around the harder stretches. At one point you reach the “Hitchem Up Matilda” bridges. They were depicted in a somewhat famous Harpers magazine painting, and consist of boardwalk supported by steel rods in the sheer face of the cliff. 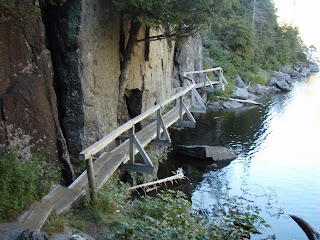 Once you reach the upper reaches of Avalanche Lake the boulder scrambling ends just as abruptly as it began. I actually thought this area was great fun. The rest of the trip over Avalanche pass was fairly easy and we finally cruised in to the lean-to, only to find it taken over by a group. No worries, I’d rather tarp camp anyway, so we found a nice quiet spot and put up our tarps. Dean once again disappeared to take a swim, this time in the stream that feeds Marcy Lake, while I was content to make my dinner and set up camp. I guess I’m just a creature of habit, but I like my camp routine. At this point I just want to say kudos to the folks at Hawk Vittles . They make some really awesome meals, and the Sweet Italian Sausage with Pasta dinner I had that evening has my mouth watering even as I type this. I highly recommend giving them a look.

Day three dawned early, and we were in no hurry. 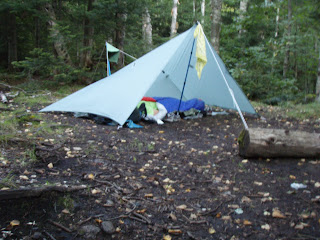 Once again we were met with some of the nicest trail the Adirondacks could produce, and it would remain that way all the way back to the trailhead. About a mile down from camp we came upon a ranger dismantling an old lean-to called “The Barn”. Judging by the pile of logs it must have been rather large. We were also told that the prior evening someone left some candy in their pack at one one of the Marcy Lake lean-tos and a bear grabbed the pack and shredded it to get at the candy. Bear cannister regs are in place to protect people from the bears, and the bears from themselves. I’m sure it sucked for whoever had to carry all their gear out in a shredded pack (lots ‘o duct tape I guess). At Marcy Lake, Avalanche Pass once again formed a great backdrop over the area. Some views you just never get tired of. 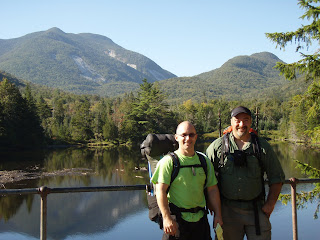 We returned to the trailhead somewhere around 10am, just in time for some Strawberry Rubarb pie in Keene before the long ride home.

I can see the Adirondacks becoming a regular obsession.